You have your St. Patrick's Day traditions. I have mine.

Everyone has their favorite St. Patrick's Day tradition - eating corned beef and cabbage, wearing green, listening to the Irish Rovers (or the Dubliners or the Pogues or Flogging Molly or any other Irish band), attending a parade, etc. 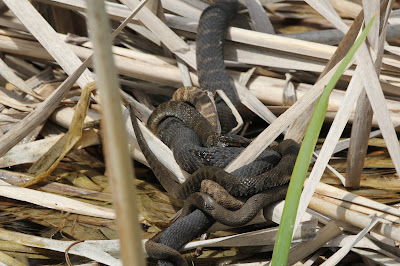 There are all sorts of legends surrounding St. Patrick.


While this is a great story, the truth is that there were never any snakes on Ireland for St. Patrick to chase away.  Ireland has been covered with glaciers during more than one ice age.  During the last glacial maximum, which occurred about 11 thousand years ago, three-quarters of Ireland was buried under a thick layer of ice.  The remainder of the island was too cold and inhospitable to support snakes and most other species of wildlife.


When the glaciers retreated, Ireland was temporarily connected to Great Britain and the rest of Europe by a land bridge.  This connection allowed some species to repopulate Ireland, but snakes did not make it across before the connection was severed by rising sea levels.  This isolation is the true reason for Ireland's lack of snakes, not an angry fifth century saint.

Posted by Mike.LeValley at 4:53 AM