When the gales of November came early... 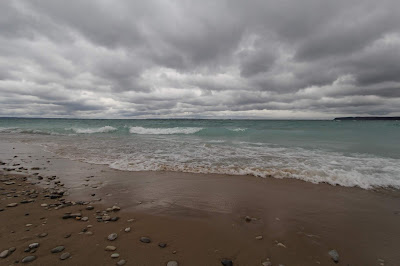 Today marks the 43rd Anniversary of the wreck of the S.S. Edmund Fitzgerald, the most famous shipwreck in the Great Lakes.

On the evening of 10 November 1975, the freighter S.S. Edmund Fitzgerald was approaching Whitefish Point, MI with a full load of taconite (iron ore) in a Lake Superior storm.   Despite the hurricane force winds, the 729 foot ship did not appear to be under distress before it sank suddenly at 7:10 PM.  All twenty-nine men aboard the Edmund Fitzgerald perished.  To this day, the exact cause of the ship's sinking is unknown, but a rogue wave (or series of rogue waves) is the prime suspect.

The ship was commemorated by Canadian singer/songwriter Gordon Lightfoot in his 1976 song "The Wreck of the Edmund Fitzgerald".

The wreck site was visited by dive teams in 1989, 1995, and 1995 to survey the site and collect artifacts.  The ship's bell was recovered during the 1995 dive.  The bell was restored and now rests at the Great Lakes Shipwreck Museum at Whitefish Point, MI. For more information on the Edmund Fitzgerald visit the Great Lakes Shipwreck Museum website.

Although the Edmund Fitzgerald is the Great Lakes' most famous shipwreck, 1975 was not the first time that "the gales of November" turned deadly.  A November storm in 1913 claimed the lives of approximately 250 sailors, sank 12 ships, and foundered approximately 30 more ships across the Great Lakes.  This massive storm which lasted for nearly five days became known as the "Big Blow" or the "White Hurricane' among other names.

On 11 November 1940, a storm known as the "Armistice Day Blizzard" sank three freighters in Lake Michigan with the loss of 66 lives.  The same storm caused the deaths of dozens of duck hunters along the Mississippi River.
Posted by Mike.LeValley at 7:01 PM