The Paper Birch or White Birch (Betula papyrifera) is an iconic tree of the boreal forests of North America.  It ranges from the Pacific Coast eastward to the Atlantic across the northern third of the continent.  Most of the range of the Paper Birch is contained in Canada, but its range dips downward into the norther Rocky Mountains, the Great Lakes, and New England.  Isolated populations can be found as far south as the mountains of North Carolina - a relict population from a much cooler Ice Age continent.

Paper Birch  can be found in deciduous and mixed forests, coastal dunes, old fields, swamps, and shorelines.  It is fast growing pioneer species, often one of the first trees to grow in logged over areas and areas burned by forest fires.  Like most fast growing trees, it does not usually reach a great height.  Average trees top out at 40 - 60 feet tall, but the species occasionally reaches 100 feet or more.  They are also relatively short-lived trees, living to about 140 years.

The Paper Birch is perhaps the easiest tree in North America to identify from a distance.  The papery-white bark with black streaks immediately clues in the identity of the tree.  Outer layers of this bark naturally peal off the tree. 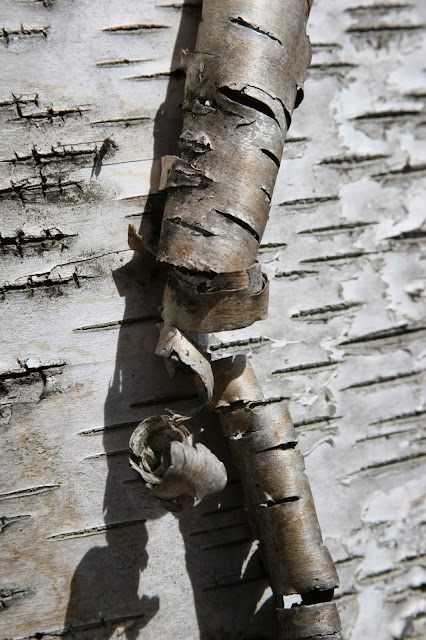 With care, large sections of bark can be peeled from the the trunk without harming the tree.  Native people across North America have used birch bark for thousands of years to craft art and utilitarian objects.  The Ojibwe people of the Great Lakes call birch bark wiigwaas and use it to craft items such as baskets, canoes, and shelters.

One rare form of craft among Ojibwe and other native people in the Great Lakes and Canada is the art of mazinibaanjigan or "birch bark biting".  To create this art, as the name implies, thin pieces of birch bark are bitten by the artist to create designs on the bark.  By varying the pressure of the bite, the bark may either be pierced or indented.  By folding and rotating the bark, elaborate symmetrical designs can be created.  My wife learned about the process at a workshop at the Ziibiwing Center of Anishinabe Culture & Lifeways.


Bark from another species of birch has traditionally been used across Northern Europe and Asia to craft utilitarian objects such as baskets.  With the breakup of the Soviet Union, many people in Siberia that traditionally used birch bark to make useful objects have begun crafting art objects out of birch bark for trade on the international market.

Fall Color:  yellow
Posted by Mike.LeValley at 5:09 AM