Friday was the first day of Spring.  With only a couple of programs on my schedule for the day, I was able to take a little bit of time to visit Mission Creek Woodland Park and see if the conditions that I found also indicated a change in the seasons.

Mission Creek is my favorite park in Mt.Pleasant.  When I visit Mission Creek, almost all of my tie is spent exploring the wetlands that make up more than half of the park.  These wetlands are a diverse group of habitats made up of sections of cedar swamp, red maple/green ash swamp, and shrub swamp.  The presence of so much water in the ground means that these habitats  react a little bit differently to the seasons that the surrounding uplands habitats.

Much of the cedar swamp is deep in shade along Mission Creek.  Parts of it are still covered with snow and ice.  Other sections do not have any visible ice, but still have frozen ground that can support my weight. 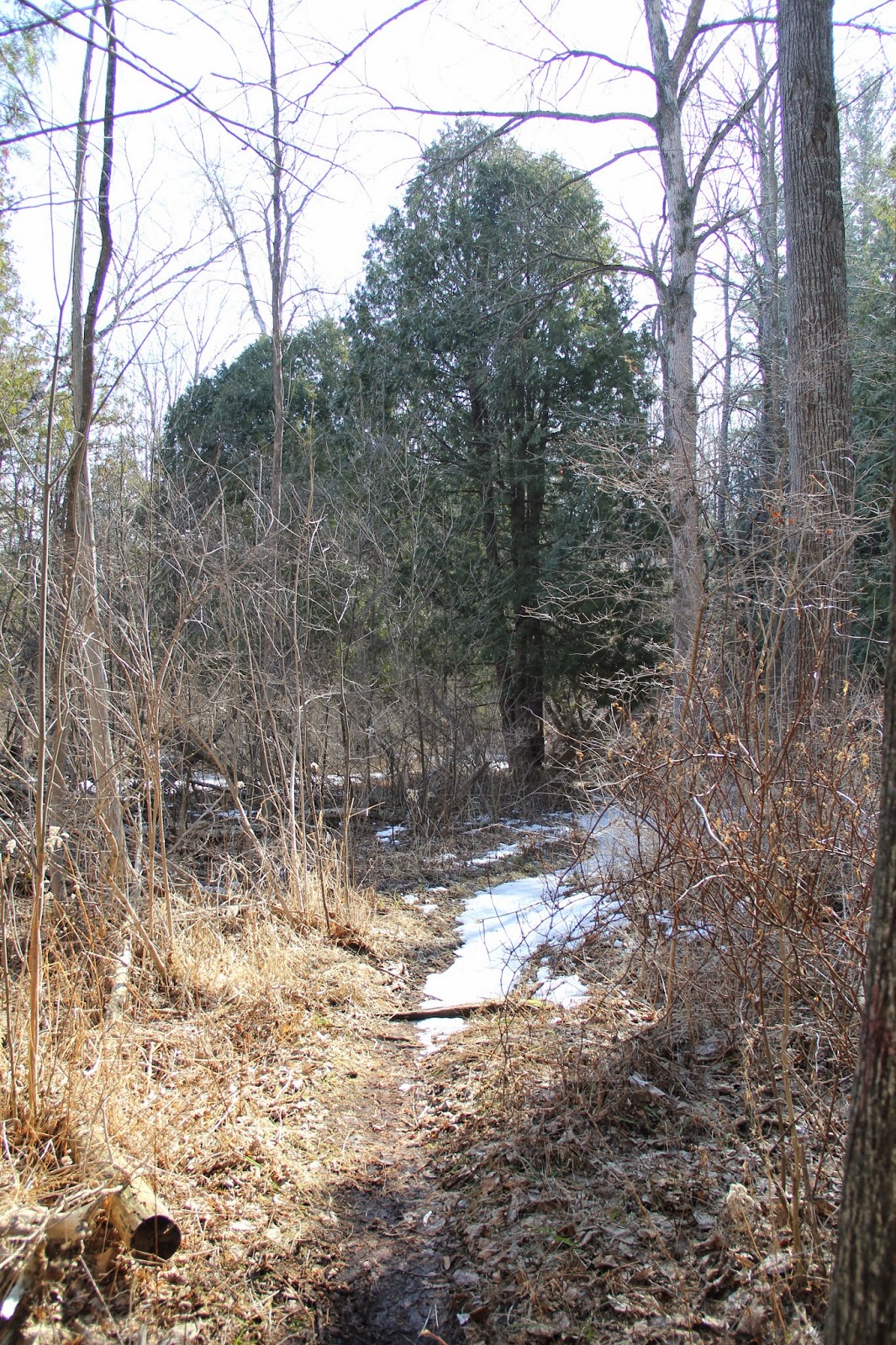 This habitat once had large cedar trees that were logged off sometime in the past.  Now only stumps remain of these monsters, hidden in the second-growth that remains. 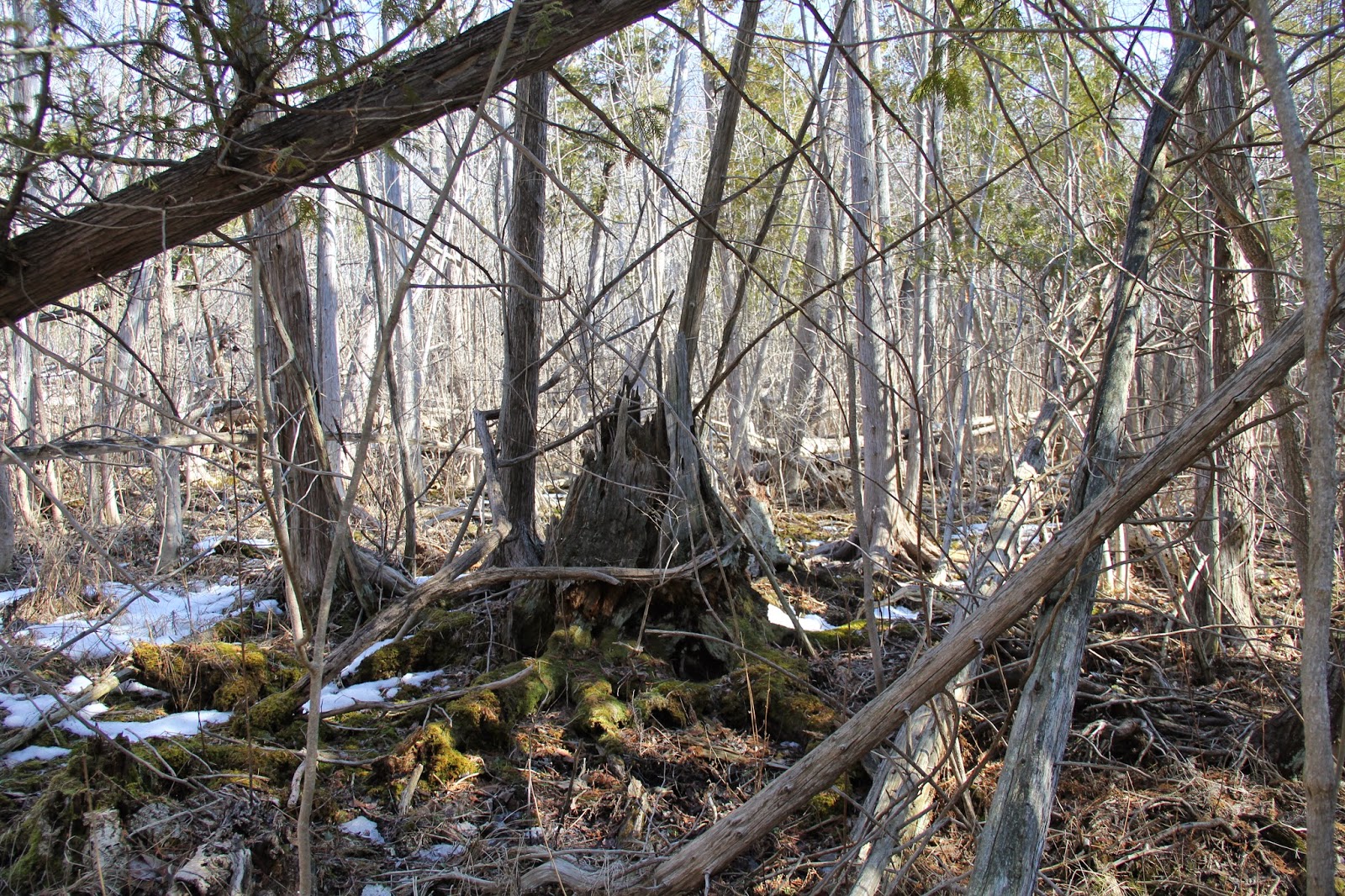 This is an important winter habitat for white-tailed deer.  Every scrap of cedar that can be reached has been browsed.  I found several clumps of fur scattered about among the windthrown trunks and root systems.  Although I did not find it, I suspect that there was deer carcass hidden somewhere nearby. 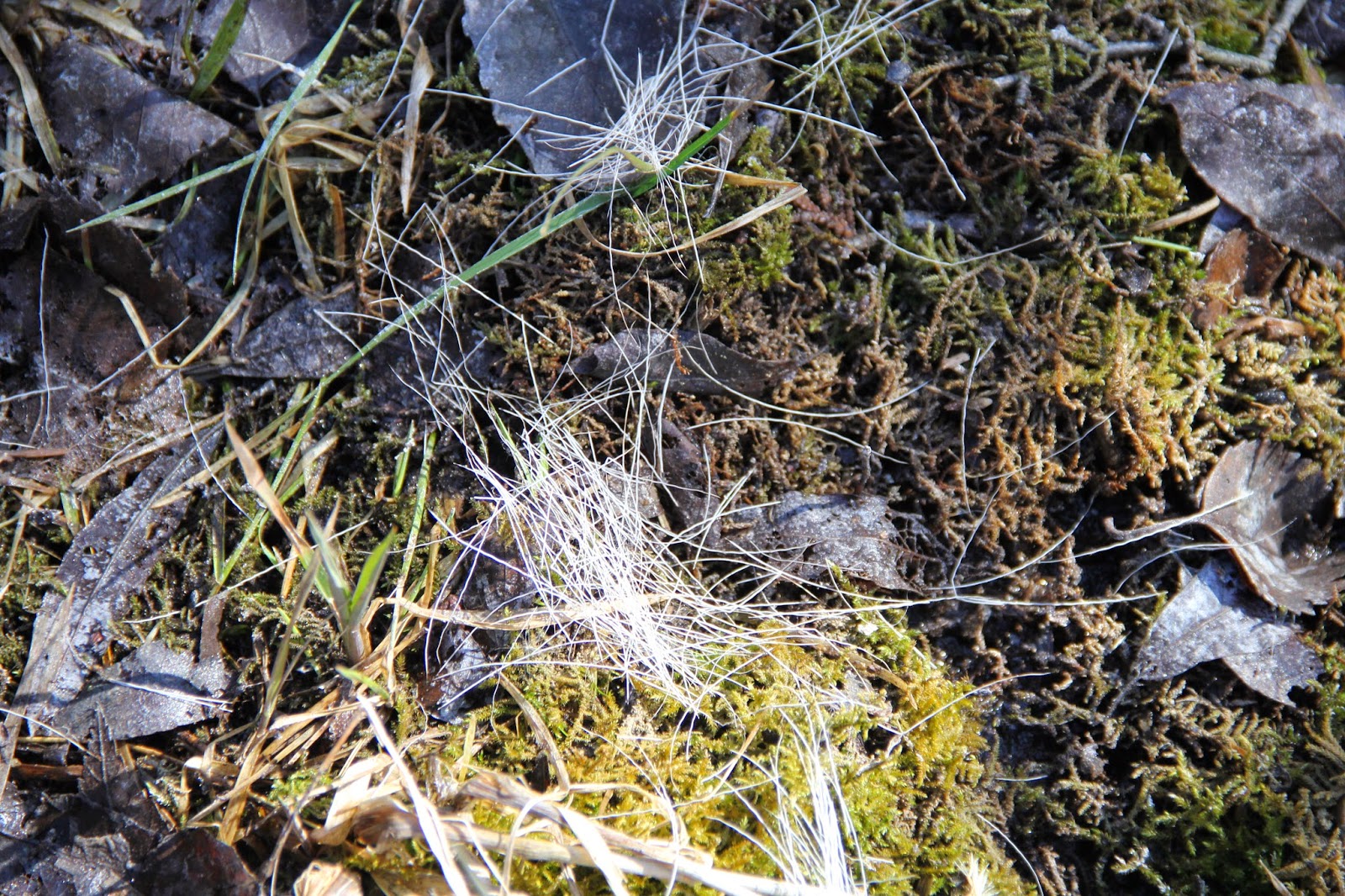 Mission Creek is my go-to find my first wildflower of the year.  Once again it did not disappoint, with small numbers of Skunk Cabbage (Symplocarpus foetidus) flowers popping up among the areas many seeps.  Within a few weeks hundreds of these smelly blooms will be present.  For more information on the Skunk Cabbage look here. 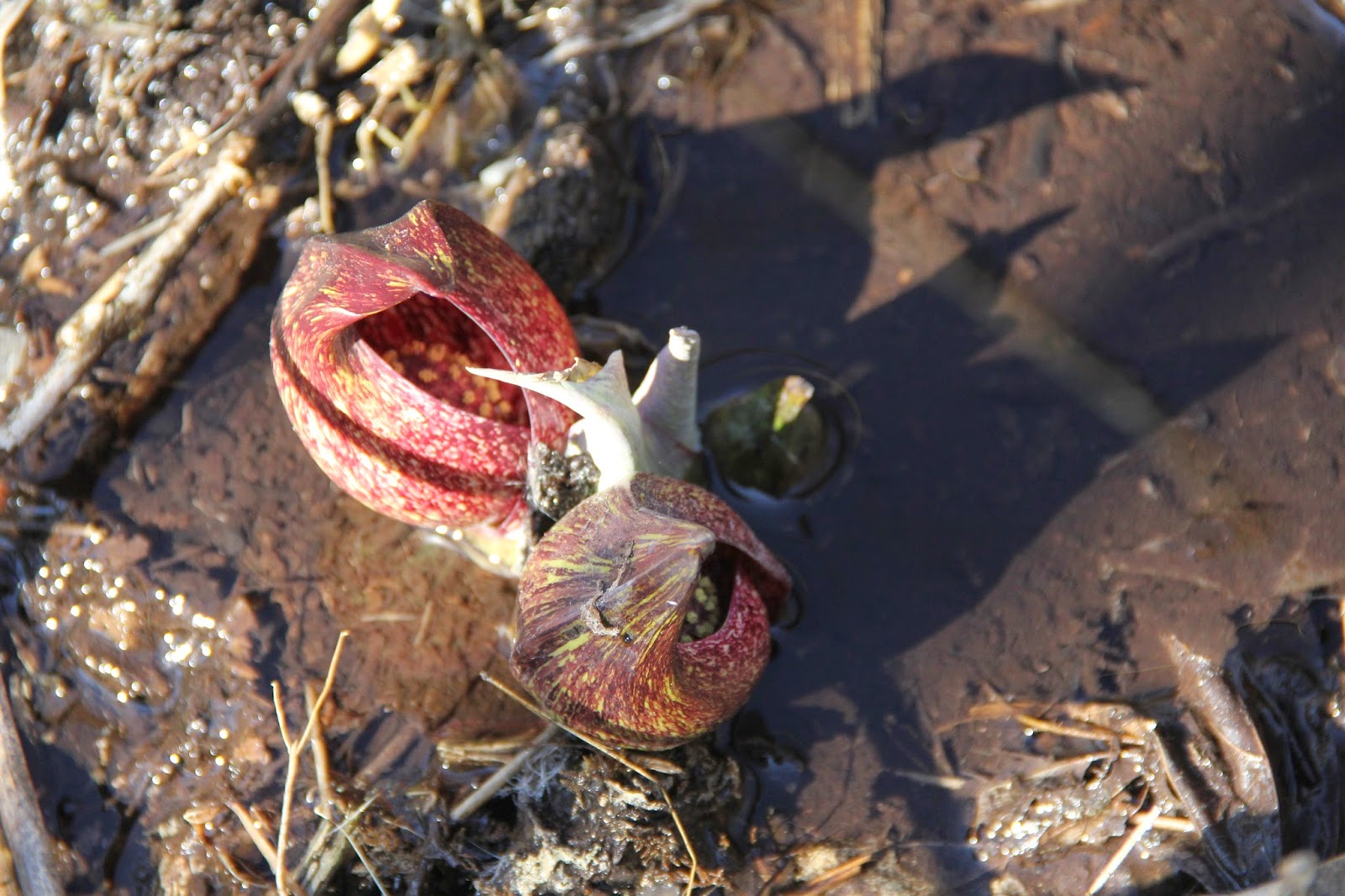 Some of the lesser-known plant varieties that can be found in Mid-Michigan are the liverworts.  This moss relative can often be found growing upon rotting logs in Mission Creek's cedar swamp. 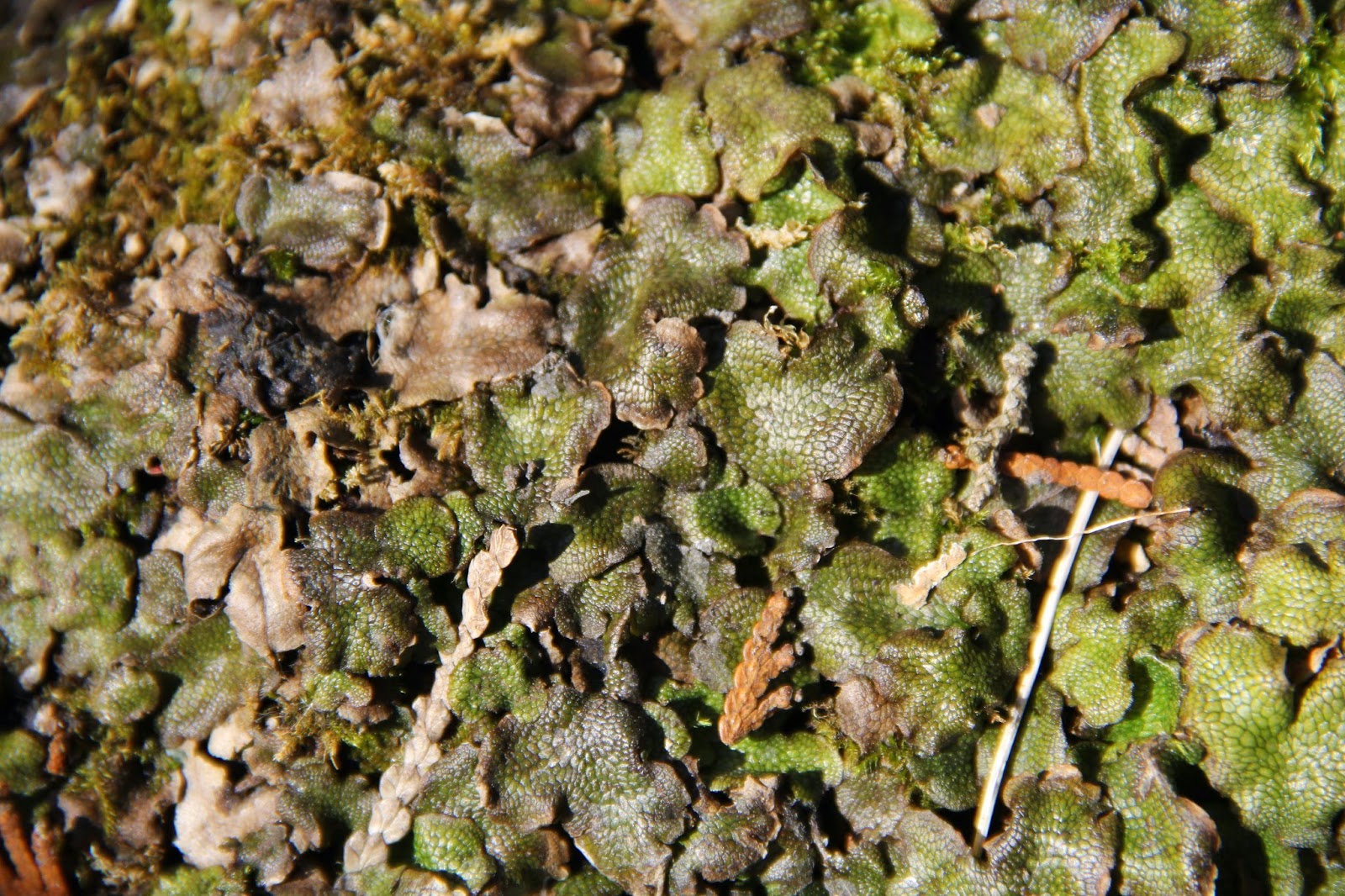 With the exception of the Skunk Cabbage, the wildflowers have so far taken little (visible) notice of the changing season.  Many plants still retain last year's stems and seed heads.  In several spaces I found the fluffy seed heads of Virgin's Bower (Clematic virginiana) 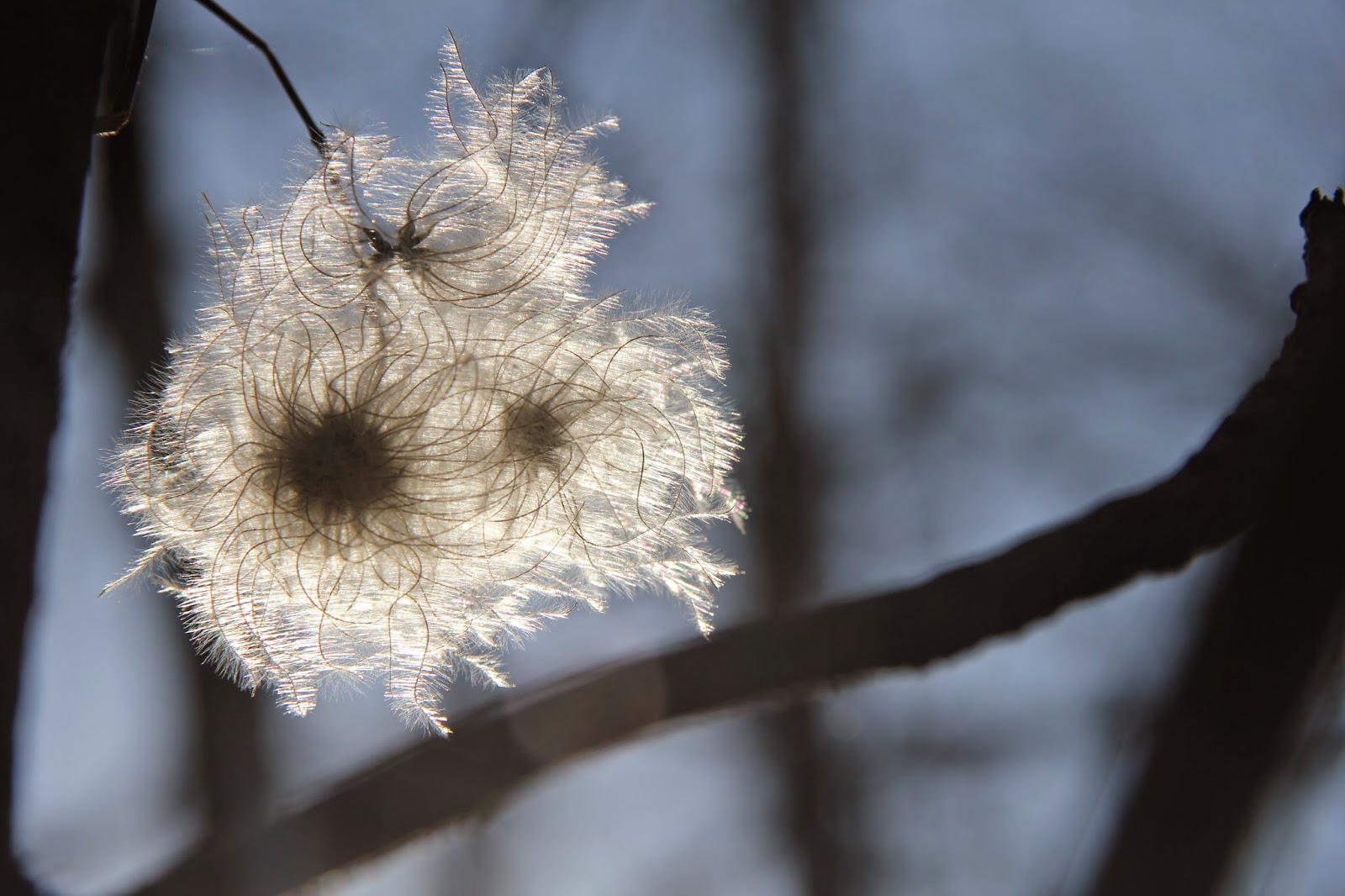 I also found the remains of last year's Rough-leaved Goldenrod (Solidago patula).  This flowerhead was melting down into the remaining snow and ice. 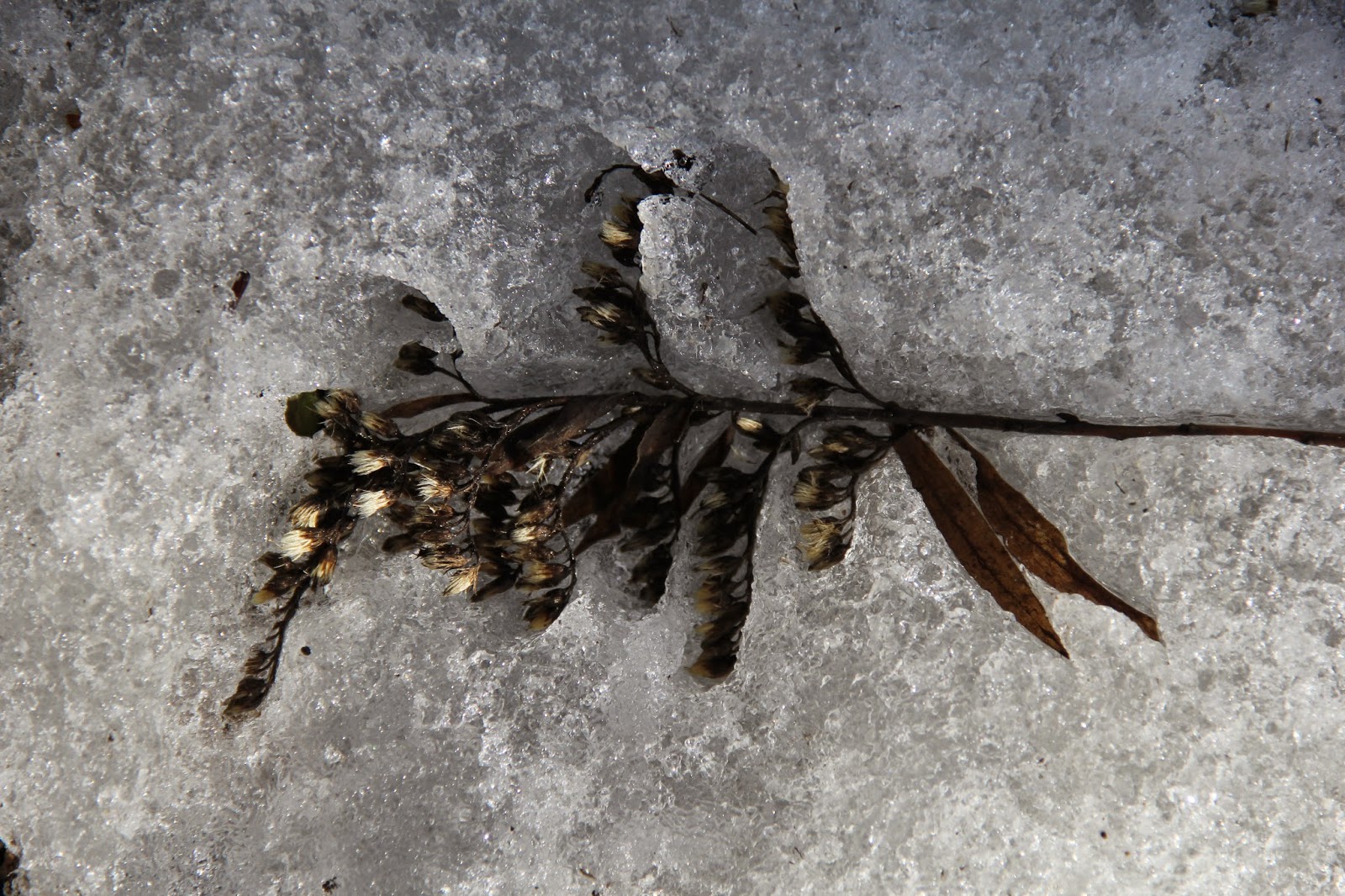 Many of the shrubs found throughout the swamp showed evidence of winter browsing by White-tailed Deer. 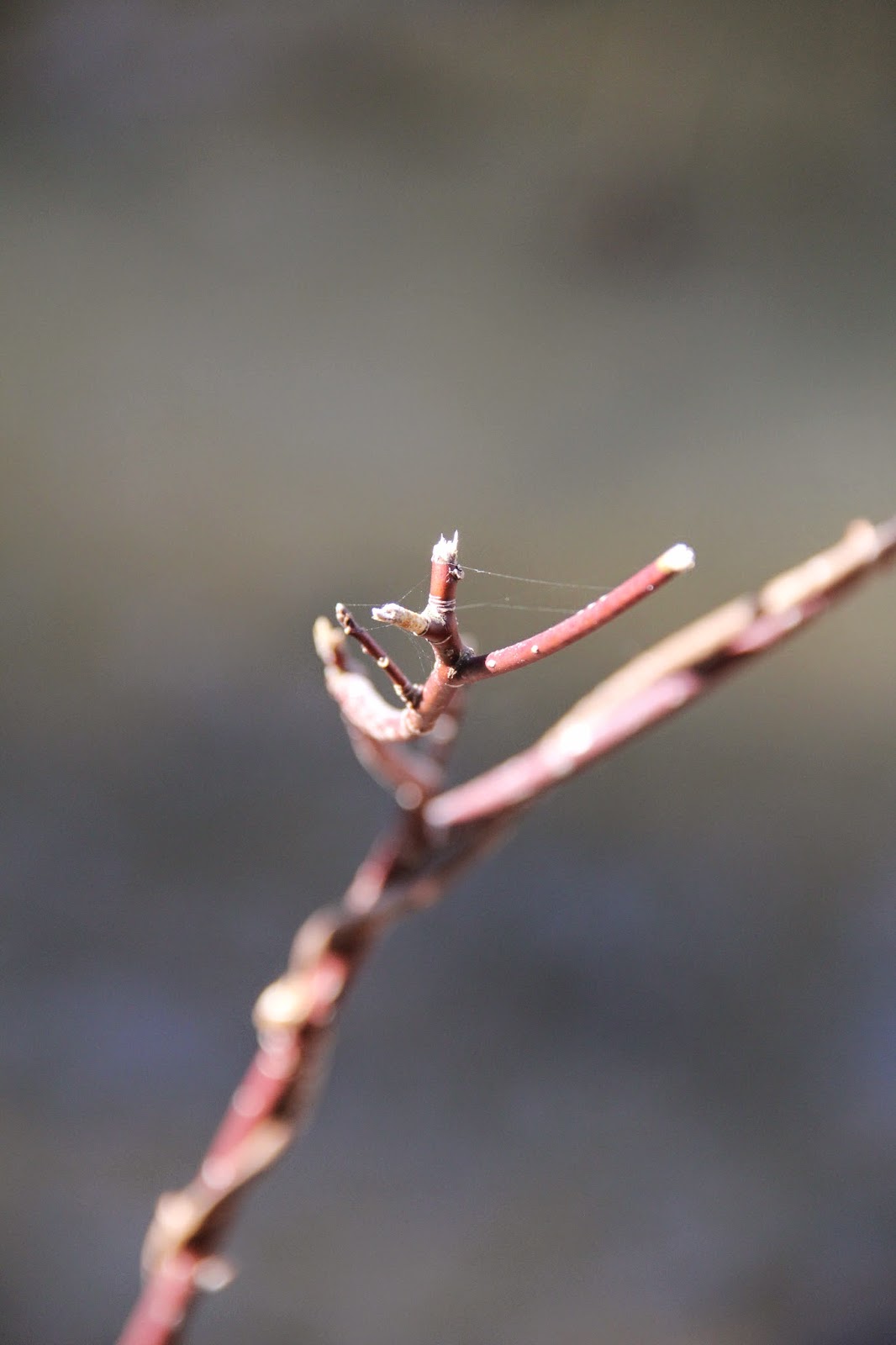 In certain areas the ground was completely bare of snow such as around this elevated section of boardwalk. 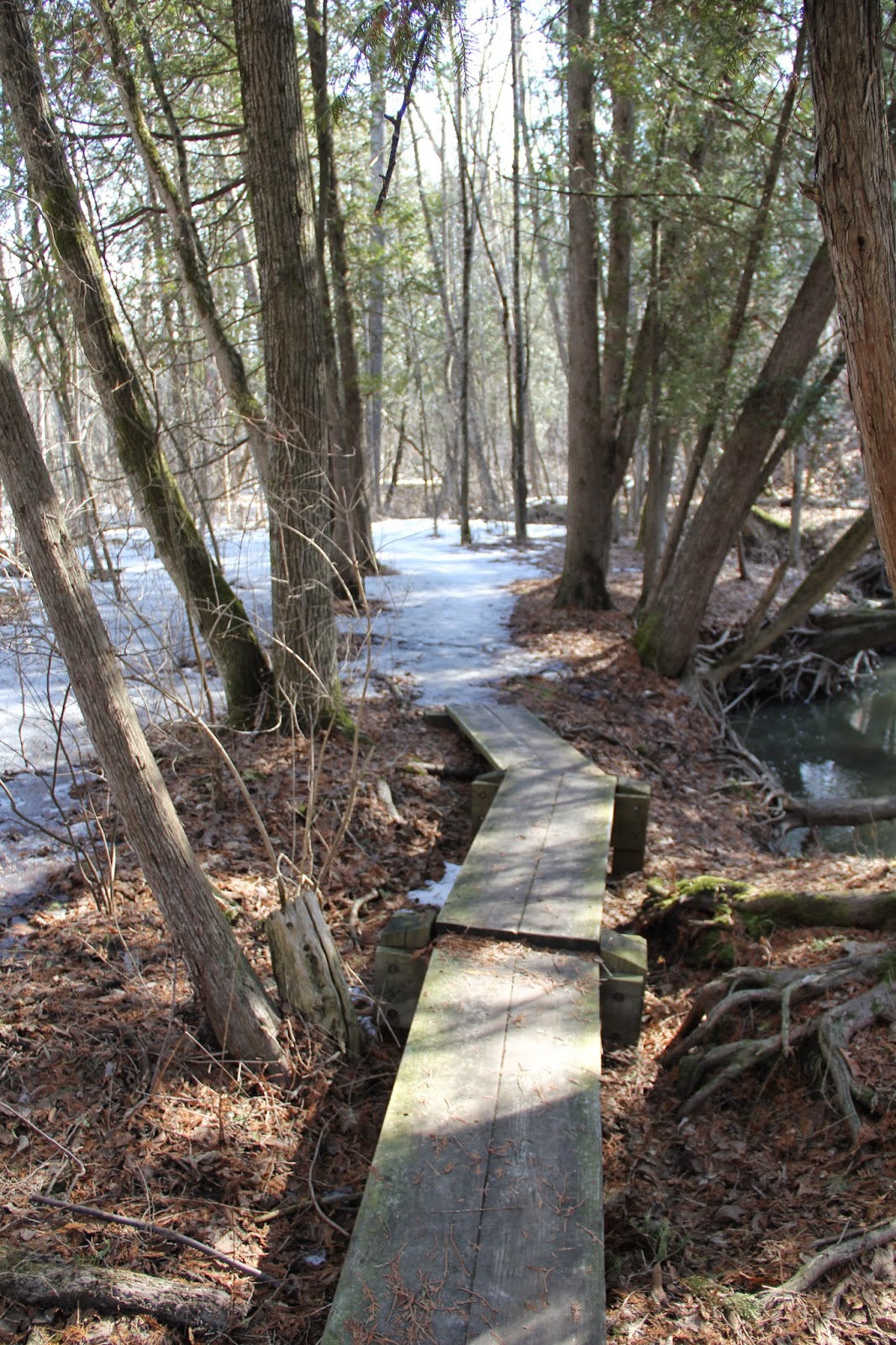 In several spots I found places where a small rivulet had melted a path down through the ice. 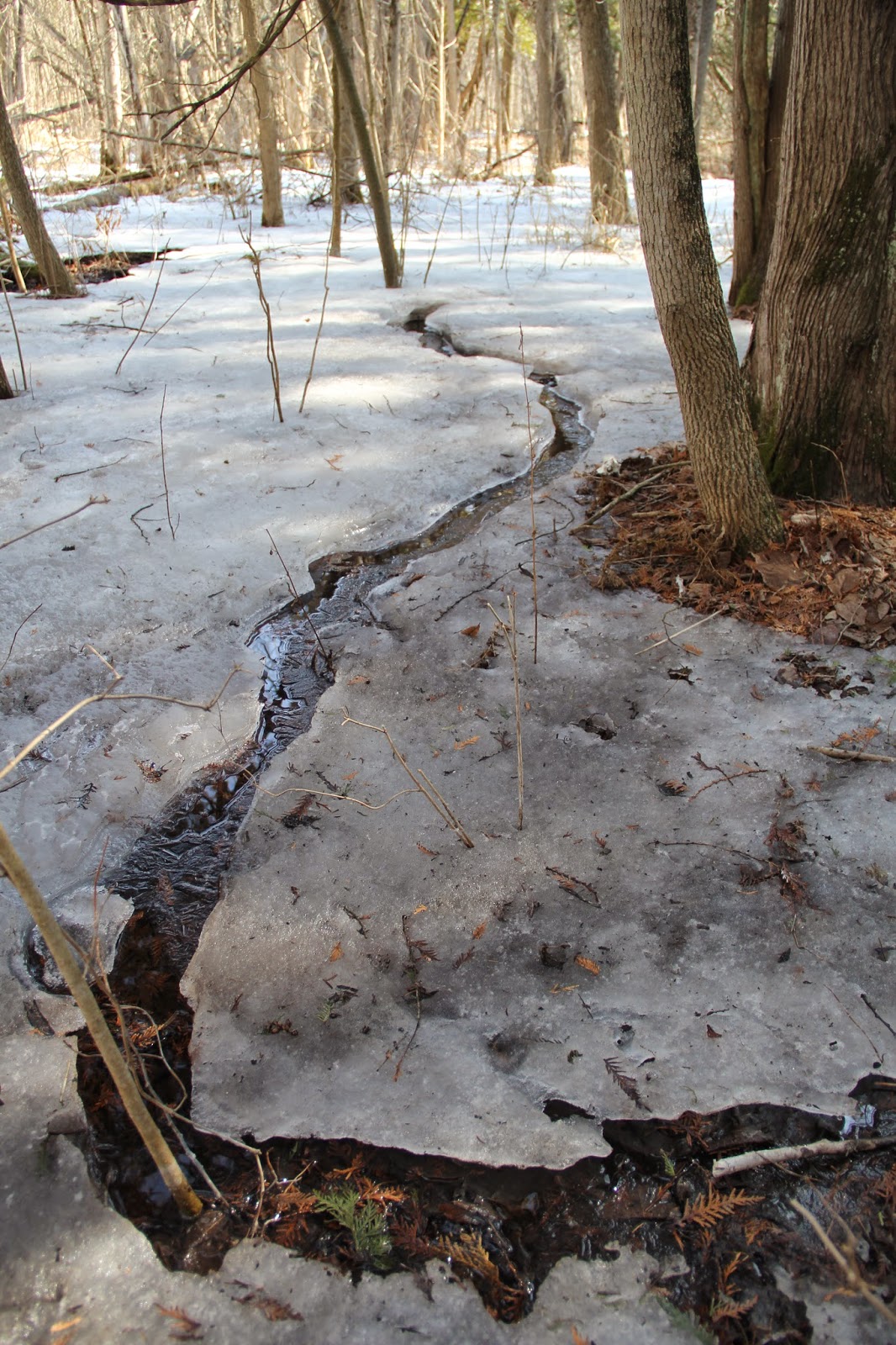 The serpentine path of this little seep originated up under the ice.  I took a few photos with my camera held down low to see the path of the stream under the ice.  On a small scale this is similar to the same process that formed some of the sand and gravel ridge that can be found in Michigan.  Known as eskers, these ridge originated as stream that carried sediment within and under the glaciers that covered Michigan during the last glacial maximum.  When the glaciers melted, the load of gravel and sand that was carried by the streams was left behind as elevated ridges. 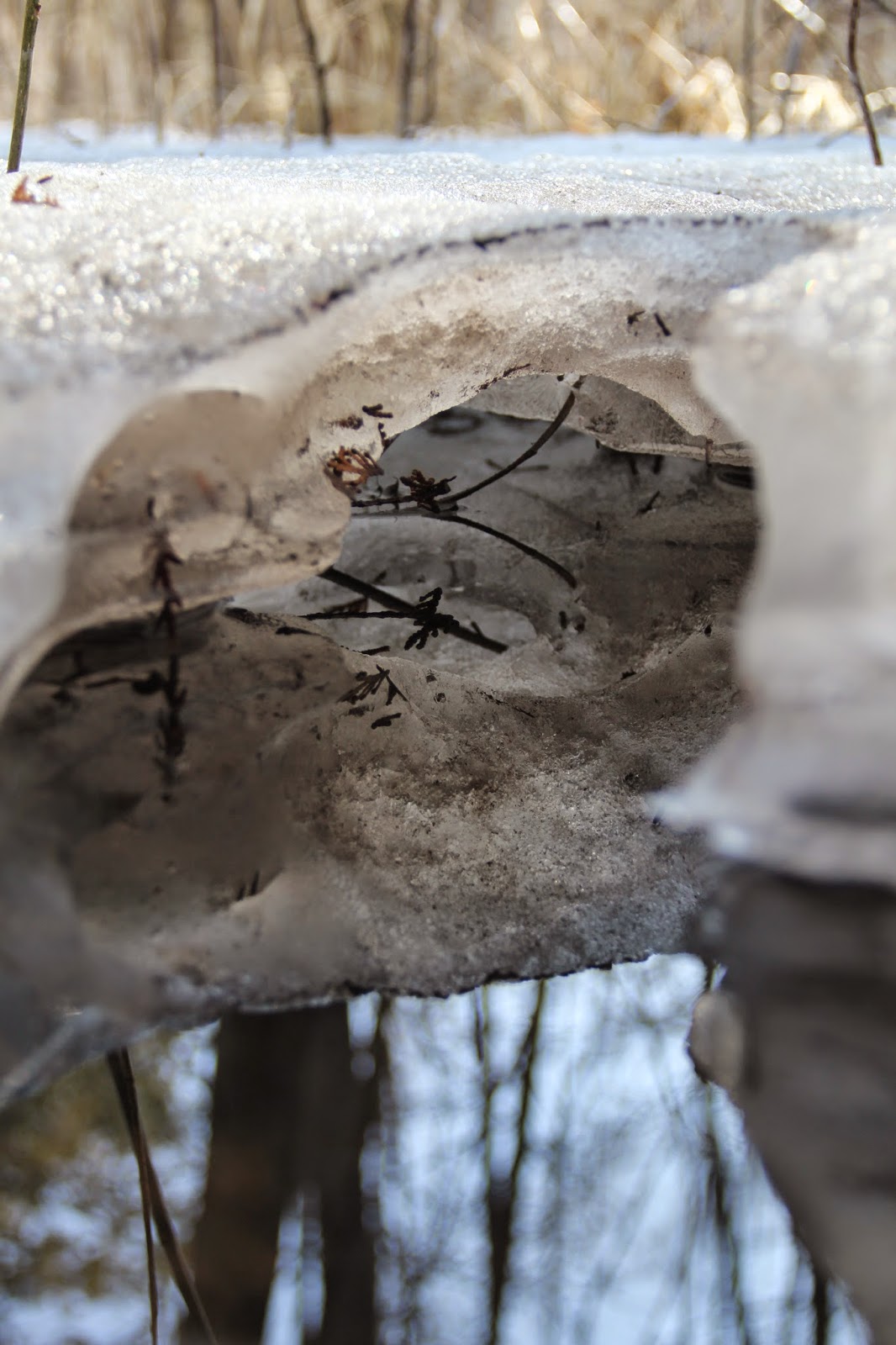 The weather was absolutely beautiful, with only scattered clouds and temperatures that topped out at 52 degrees Fahrenheit. 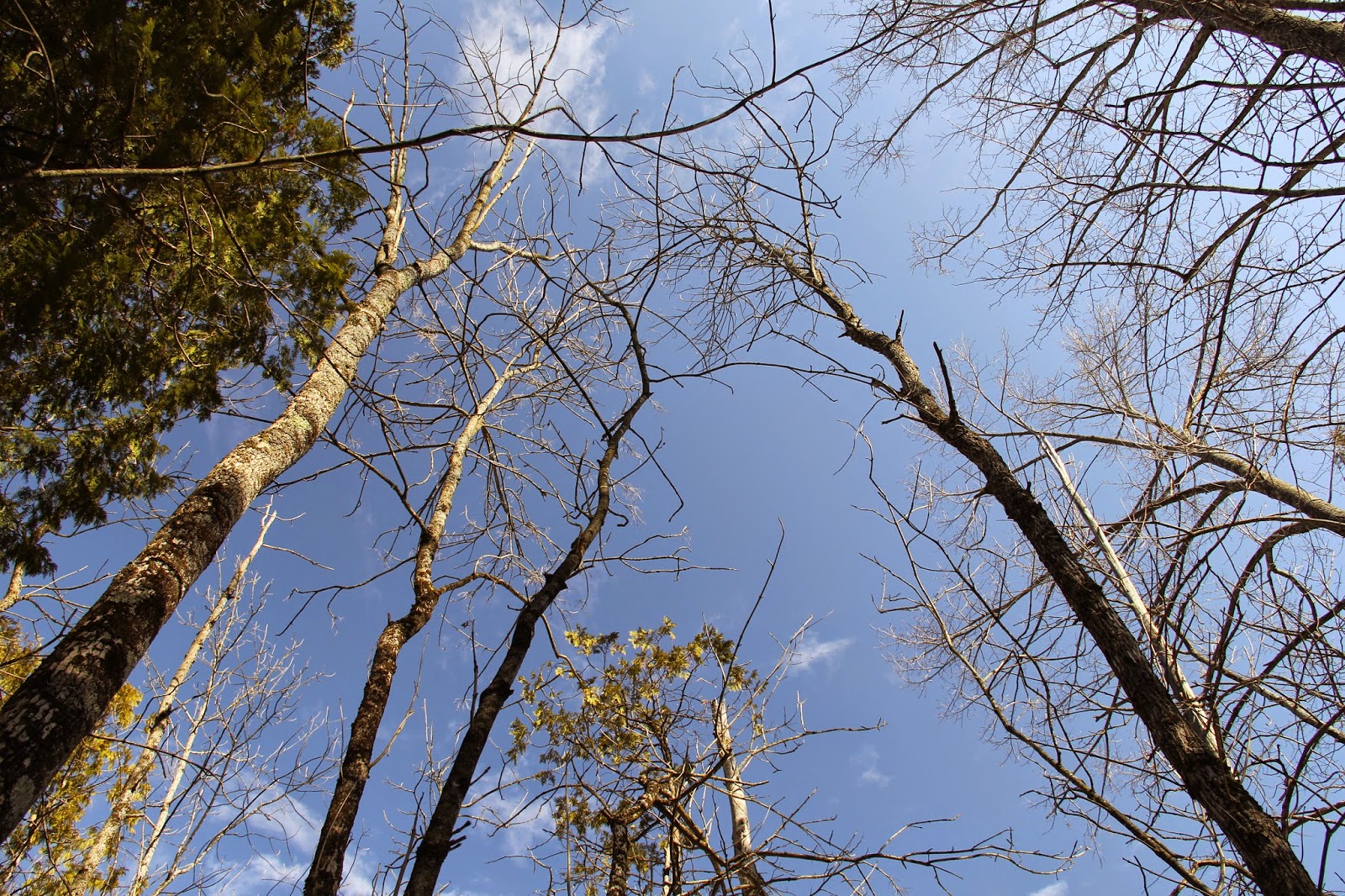 Mission Creek Park is home to many species of wildlife, including several species of woodpeckers.  Insects within this Northern White Cedar attracted much recent attention from Pileated Woodpeckers. 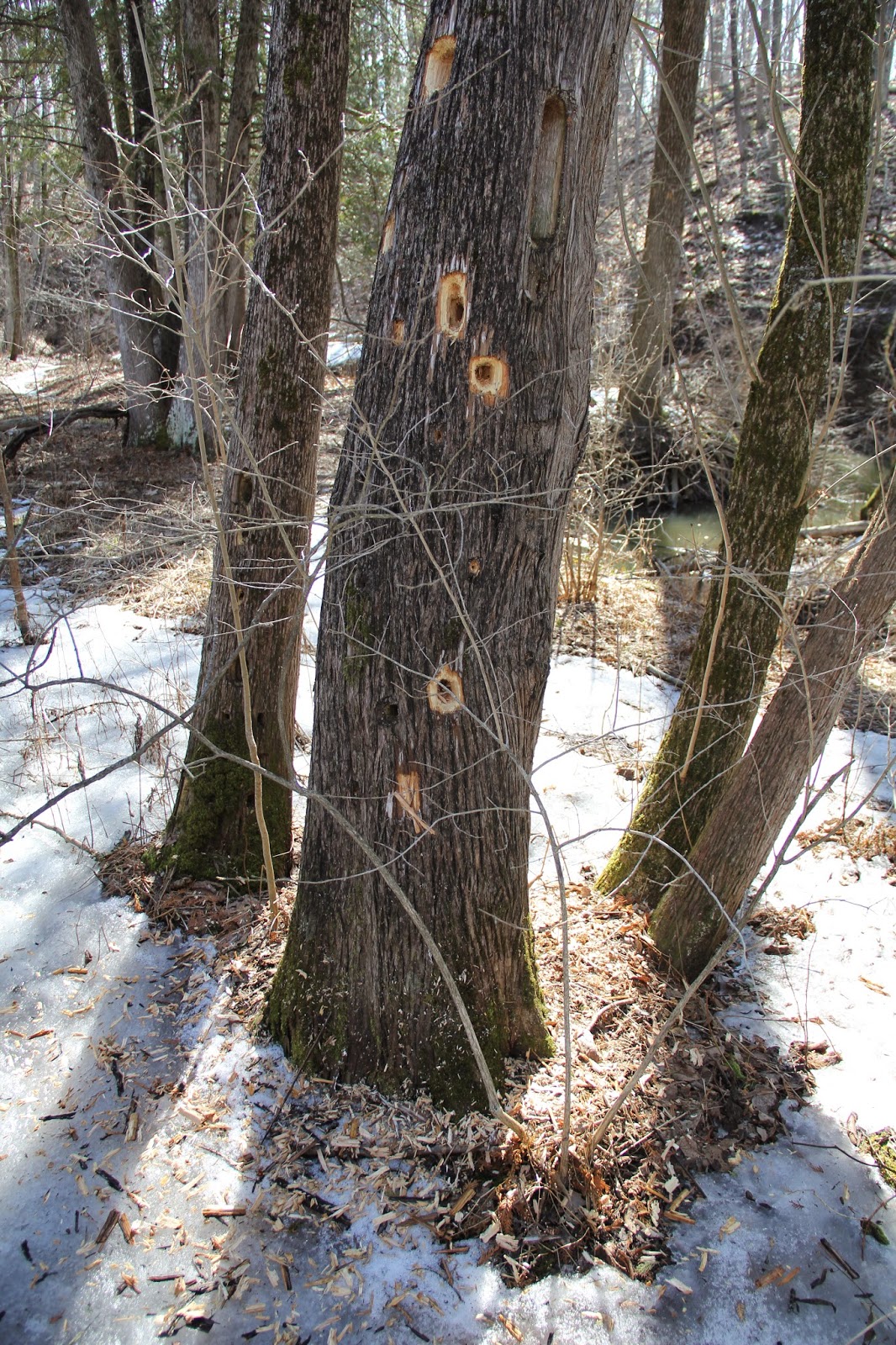 As I mentioned, the degree of snow and ice coverage varied from nonexistent to several inches.  This means that spring progresses at different rates throughout the swamp. 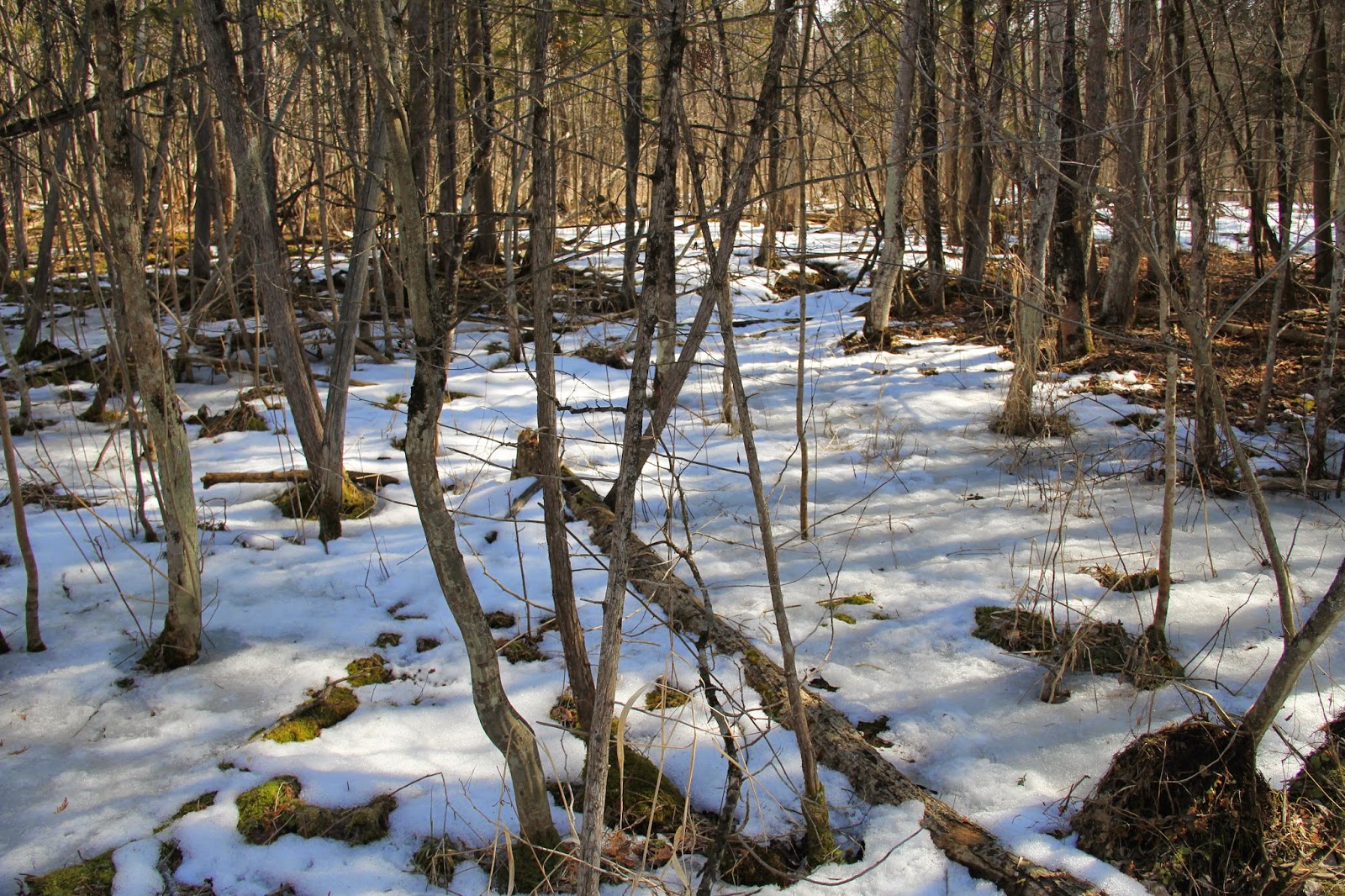 As I left the cedar swamp area, I noticed one of several Eastern Chipmunks (Tamias striatus) that I had seen on my walk.  This individual was busy consuming acorns atop a mound created by the root system of a wind-thrown tree.  Judging by the number of acorn husks, this is a favorite feeding station. 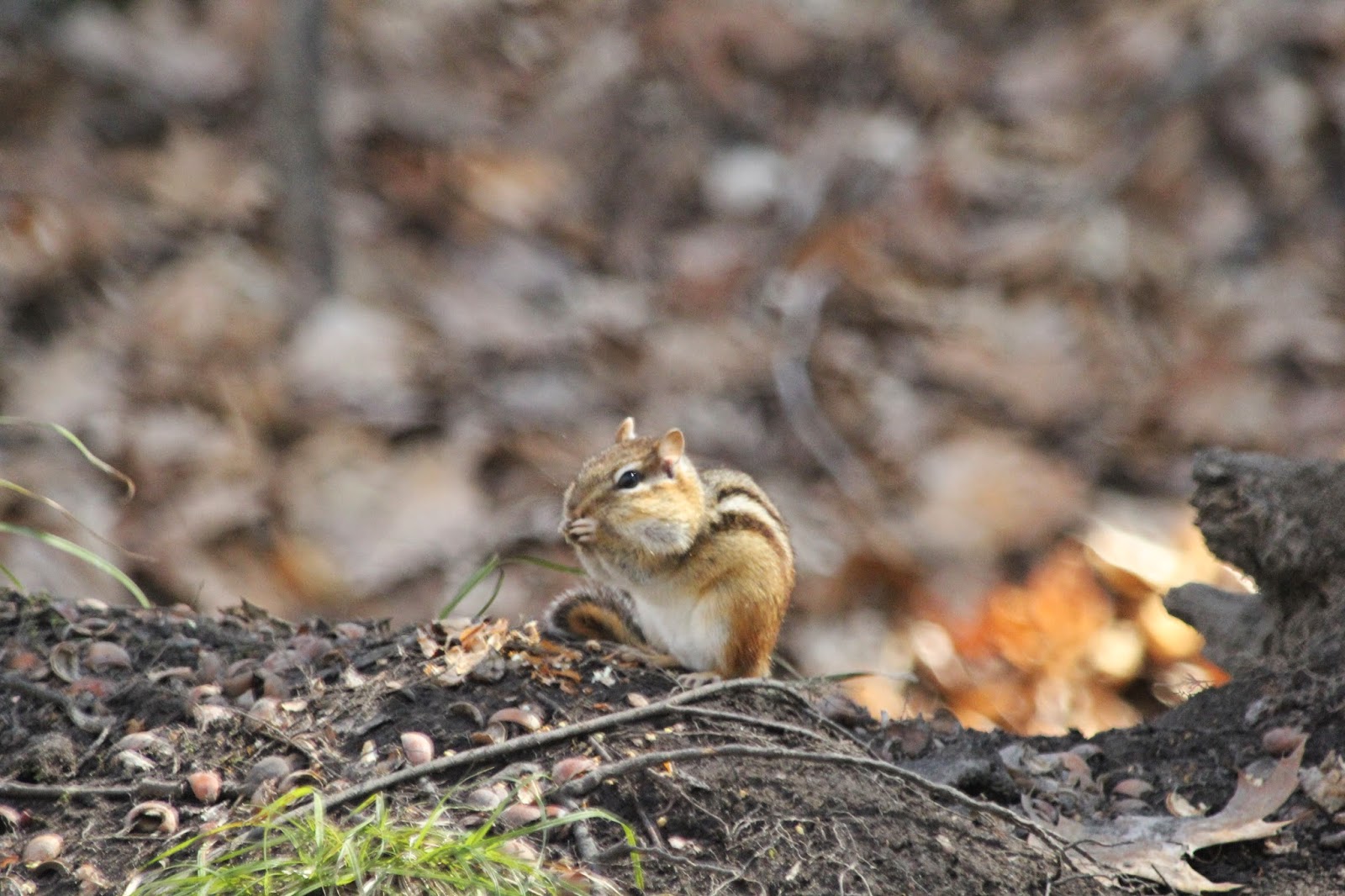 I made my way out of the wetlands, by way of passing through a section of the red-maple/green ash swamp.  Much of this area is covered by sedges during the growing season.  Right now their leavves are creating interesting patterns as the ice melts around them. 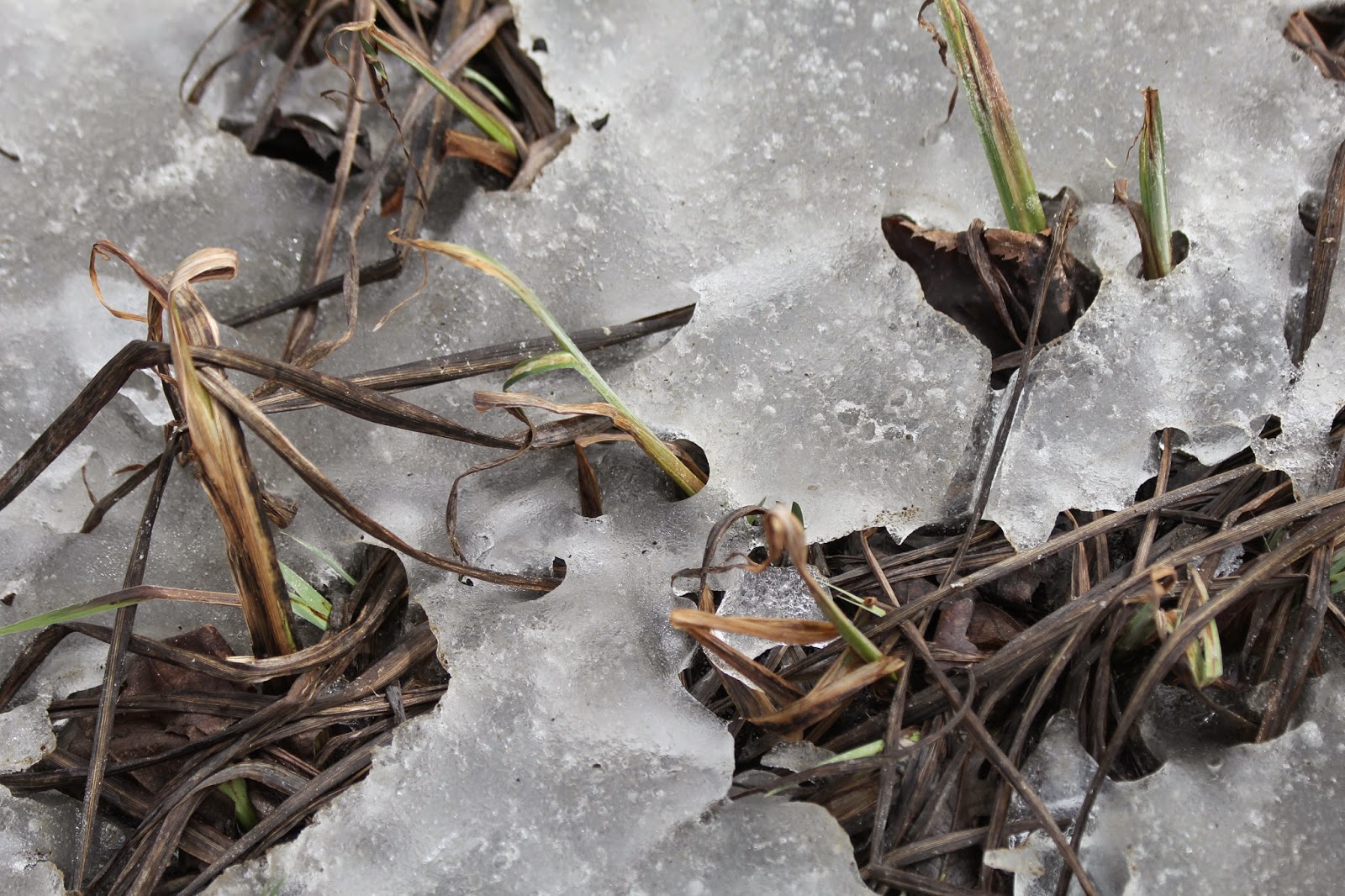 My final photograph is of a Sugar Maple leaf that had blown down from the surrounding upland forest.  It was slowly melting down into the remaining ice. 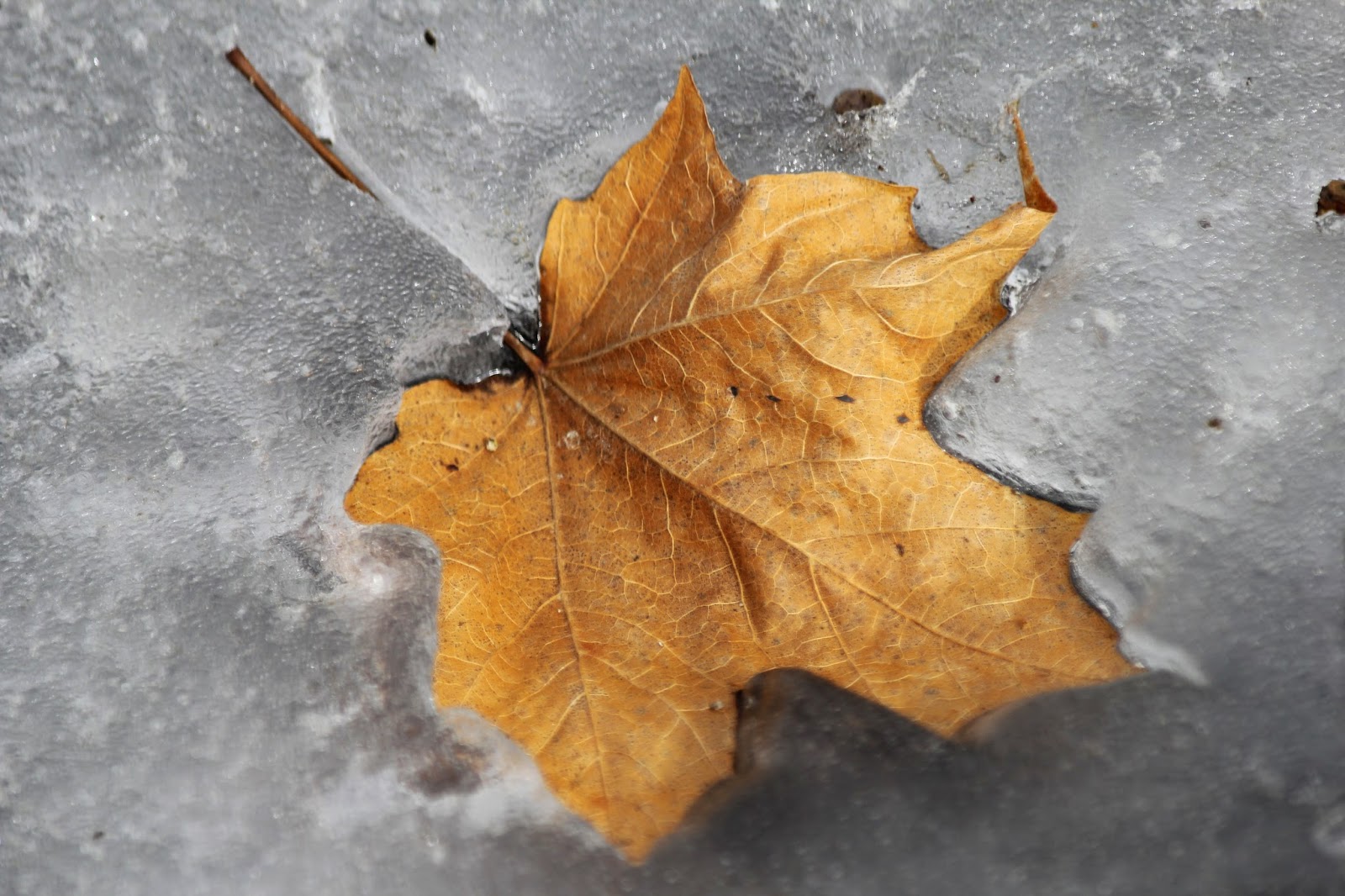 Posted by Mike.LeValley at 4:32 AM