Yes, you read the title of this post correctly.  It does say "Michigan's Largest Giant Sequoia".

The Giant Sequoia (Sequoiadendron giganteum) is native to the west slope of the Sierra Nevada Mountains Range in California.  They are among the largest and oldest living organisms on earth.  Record trees have been measured as tall as 311 feet (94.8 meters) and with a trunk diameter of 56 feet (17 meters).  There were more than 3500 growth rings counted on the stump of one tree!

The trees that are found in Michigan are babies in comparison.  Because the Giant Sequoia is not native to the state, any Sequoia found here has obviously been planted by man.

The largest Giant Sequoia in Michigan can be found at the Michigan Audubon Society's Lake Bluff Bird Sanctuary.  Lake Bluff Sanctuary is located just north of Manistee, MI at 2890 Lakeshore Road (just north of Orchard Beach State Park.  This is about a two hour drive from Mid-Michigan. 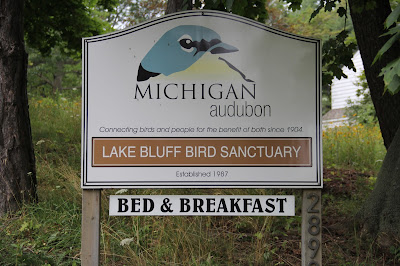 The Lake Bluff Sanctuary was donated to Michigan Audubon in 1988.  The property was previously an estate owned by Edward and Gertrude Gray.  Mr. Gray was the nephew of the founder of the Morton Salt and managed the company's salt plant in Manistee.  They purchased the property in 1936 and began building a home.  The home is now operated by Michigan Audubon as a Bed & Breakfast (rates are $80 - 95 per night depending on the room).  During our visit to the sanctuary we booked a weekend for later this fall.

On the grounds of the estate they established an arboretum with over 70 varieties of trees from around the world.  One of the species that was planted was the Giant Sequoia.  Six of these were planted in 1948.  Of those six, tree remain alive.  The tallest of these is approximately 95 feet (approx. 29 meters) tall.

The above photo doesn't look that impressive until you add a human being into it for scale.  Here is a photo of me standing next to the tree.

These lower branches have died out naturally as the branches above shade them out.  Eventually the tree will drop these branches.


One thing that amazes me about sequoias is the relatively small size of their cones.  The cones are not much larger than those of a red pine.  The seeds that come from the cones are only about 1/4 inch long.


Giant Sequoias were not the only interesting trees planted in the arboretum.  We also found this Dawn Redwood (Metasequoia glyptostroboides), Ginkgo (Ginkgo biloba), American Tulip Tree (Liriodendron tulipifera), and many other other species.


Outside of the arboretum, much of the grounds have been restored with native plants. 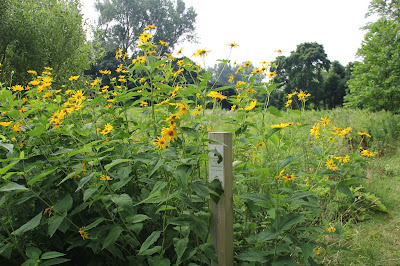 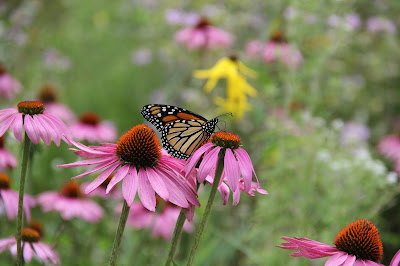 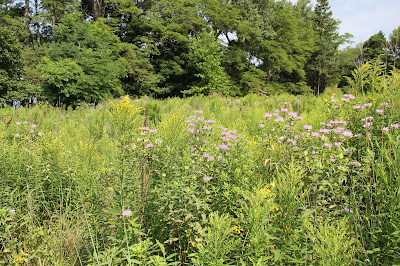 Other features of the site include over 300 feet of Lake Michigan Shoreline, two miles of walking trails, and a great view of the lake from atop the bluff.

Michigan Audubon also operates a small visitor center at the preserve.  I doubt that there is usually anyone manning the center, but it is a nice place to get out of the weather for a few minutes.