On Wednesday June 22nd, I stopped at Island Park and Pickens Field to look for new wildflower species along the banks of the Chippewa River.  I found a total of five new species to add to my 2016 list.

On June 9th I photographed the flowers from Western Poison Ivy (Toxicodendron rydbergii) at Island Park.  Since that time I have been looking for the flowers of Eastern Poison Ivy (Toxicodendron radicans), but I every plant I found was either not blooming yet or had finished blooming already.  Finally, I found some vines along that south edge of Pickens Field with blooms.  Unfortunately, I could not get close to get good images - there was too much Poison Ivy in the way and I am allergic.


How can I be sure that these flowers belong to Eastern Poison Ivy and not the Western species?  It's simple.  This plant was climbing a tree.  Western Poison Ivy never climbs.  For more information on how to identify poison ivy plants check out my post titled "Leaves of Three... Revisited".


Most of the plants in this colony are under 10 feet tall, but the species can reach heights of 30 feet.  Staghorn Sumac has large compound leaves that may be up to 24 inches long.  The flowers of Staghorn Sumac are arranged on a branched, pyramid-shaped spike at the terminal end of the trunks.  Individual flowers are pale green in color and small (measuring 1/4 inch across).  The whole flower spike may measure 12 inches long and 6 inches across.

Staghorn Sumac is found throughout the eastern United States and Canada.  It is the largest of four Sumac (Rhus) species found in Michigan and can be distinguished from other Sumac species by its dense coating of hair on leaf stalks and branches.

On a side note, Poison Sumac is also found in the state.  Despite its name, it is unrelated to true Sumac species.  Instead it belong to the same genus (Toxicodendron) as the two species of poison ivy.

I found my third species of the day along the north side of Island Park.  Moneywort (Lysimachia nummularia) is native of Europe and Asia Minor.  Its bright yellow flowers and low growing nature make it an attractive groundcover in gardens.  It has escaped cultivation to become naturalized in more than thirty states and seven Canadian provinces.  Moneywort did not appear on my 2014 list.


Also known as Creeping Jenny, Moneywort is a non-climbing vine that can be up to 3 feet long.  The plants leaves are round, measure 1 to 1.5 inches across, and are arranged in opposite pairs.  Its flowers have five petals and measure about 1 inch across.


Creeping Yellow Cress (Rorippa sylvestris) is another new species for me.  As a member of the Mustard Family (Brassicaceae), Creeping Yellow Cress has flowers with four petals.  The flowers are yellow and measure about 1/3 inch across.  The flowers grow in a raceme at the top of the plant.  After flowering, the blooms are replaced by narrow seed pods (siliques).  This species spreads both by seed and by underground roots.  Creeping Yellow Cress plants grow to up to 2 feet tall, but often sprawl.   The lobed leaves are probably the most distinguishing feature of this plant.


Creeping Yellow Cress was originally a native of Europe.  It has naturalized in forty-one states and across the southern tier of Canada.  It is considered a noxious weed by several states.  It has only been previously collected in 20 counties in Michigan (not Isabella County).  Depending on region, this species is considered either an obligate wetland species (always occurs in wetlands) or a facultative wetland species (usually occurs in wetlands, but may grow in uplands).  The plants that I found were growing in the Chippewa River floodplain, typical habitat for this species.

My final flower of the day was another non-native species.  For almost a decade, I worked seasonally as a maintenance employee for the Mt. Pleasant Parks & Recreation Department.  One of my duties involved limited removal of invasive species (we had to pick our battles).  The species that I worked the hardest to control was Purple Loosestrife (Lythrum salicaria). 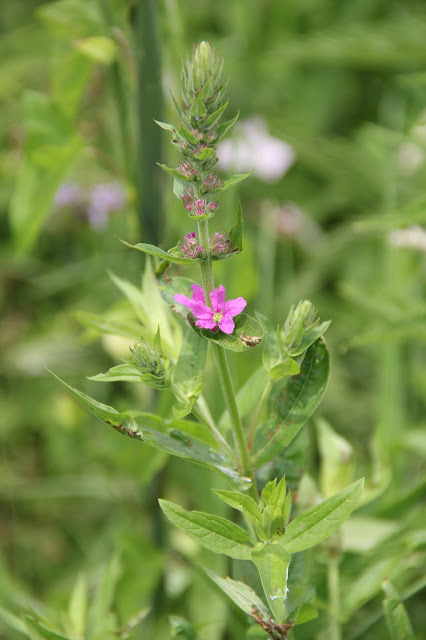 Purple Loosestrife (Lythrum salicaria) is a native of Eurasia, northwest Africa, and Australia.  It was introduced in North America originally as an ornamental plant in the 1800s.  Unfortunately, this plant easily escapes cultivation - individual plants may produce more than 2 million seeds in a single year!  Once established in a natural area, it becomes almost impossible to eradicate and quickly outgrows the native vegetation.  It can now be found in 43 states and 10 Canadian provinces and territories.  Many wetlands that have been infested with this plant have become almost complete monocultures, with little to no native vegetation remaining.


Purple Loosestrife is fairly easy to identify.  Its flowers are arranged in spikes at the top of the plant.  Individual flowers are purple, have 5-7 petals (normally 6), and measure 1/2 to 1 inch across.  Flowering spikes may be 6 inches to 2 feet long.


Purple Loosestrife leaves are lanceolate (shaped like a lance or spear point) and may measure up to 4 inches long.  They are normally arranged in opposite pairs or whorls of three leaves, although some upper leaves may be arranged alternately.  Plants may grow to 6 feet in height, but may flower when less than 12 inches tall.  Another distinguishing feature of Purple Loosestrife in the square cross-section of the plant's stem.


If you find this plant growing in a wetland area, pull or dig it up.  If it has gone to seed, tie a plastic bag over the seed head before you try to remove the plant.  Once you have it dug up, place the entire plant in a garbage bag and dispose of it either by placing in the trash or by burning.
Posted by Mike.LeValley at 8:59 AM