A tale written in snow (attempt #2)


Some people probably noticed a blank post last night or earlier today.  I spent more than an hour last night working on this post, only to have everything disappear when I hit publish.  This is not the first time something like this has happened.  Every once in a while Blogger (in conjunction with my internet browser) likes to go nuts.

Last week while photographing the river ice at Mill Pond Park I happened to look down and notice something interesting in the new snow on the bridge. 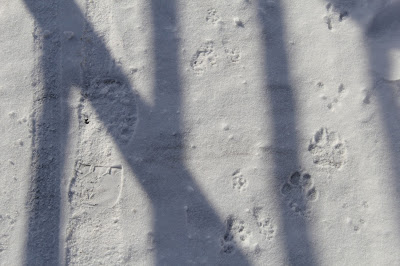 What do you see?  Who or what has left its mark in the snow?

The photograph shows an area approximately 2 feet by 3.5 feet.  It contains six different sets of tracks, representing four different species.  While it was wasn't a surprise that so many species a bridge to cross over the river, we rarely see the evidence of their passing. 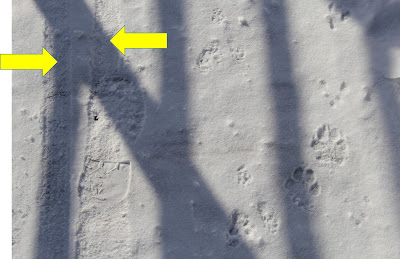 Next from the left is single human footprint.  The person that made this track was headed south and crossed the bridge sometime after at least one of the bicycles.  This fact should be obvious - the footprint is on top of one of the bicycle tracks. 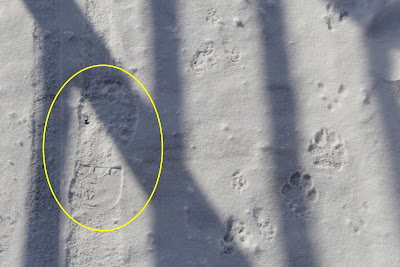 Third from the left (in the center of the photograph) are two sets of footprints made by a squirrel traveling from the south side of the river to the north.  You can see how the sets of tracks form a V-shape with the front footprints forming the point of the V and the hind footprints forming the arms.  Although it seems illogical, the large rear footprints are usually found in front of the front footprints.  This pattern is typical of all rodents and other animals that move by hopping such as rabbits and hares. 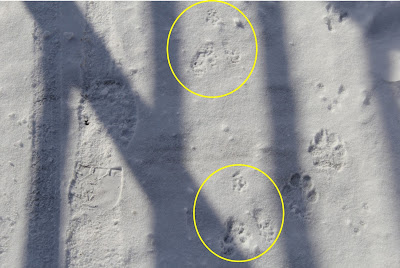 The fourth set of footprints belong to a canine heading south across the bridge.  Although both fox and coyote can be found in Mt. Pleasant, it is most likely that these prints belong to a domestic dog, probable walking with the person traveling on foot. 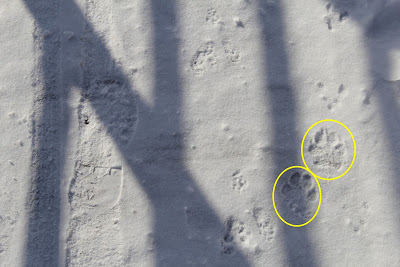 The final footprints can be seen along the right side of the photograph.  There are three sets of tracks belonging to a mouse.  Like those of the squirrel, mouse track form a V-shape with the hind feet on the arms of the V and the front footprints forming the point.  Also like the squirrel, the hind feet are in front of the front feet when the animal hops.  This mouse traveled from the north side of the river to an island in the middle of the river where it (presumably) climbed down the bridge abutment - ti's tracks did not continue all the way to the south shore of the river. 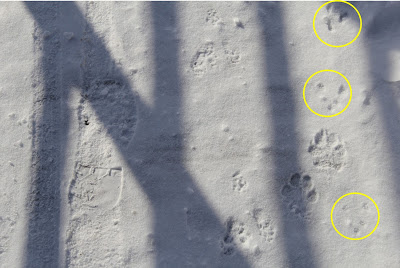 It is not unusual for animals such as squirrels and mice to use bridges, it is rare for us to see them doing so.  I wonder how many animals cross this bridge on a regular basis without our knowledge.
Next time it snows go outside and see if you can find some of these hidden stories.
Posted by Mike.LeValley at 4:49 PM