Ice on the Chippewa River

The recent cold snap means that our local bodies of water are beginning to freeze over, including the Chippewa River.  Yesterday I stopped at Mill Pond Park to see the extent of the freezing.  I found the river partially frozen over with a jumble of icy blocks and ropes. 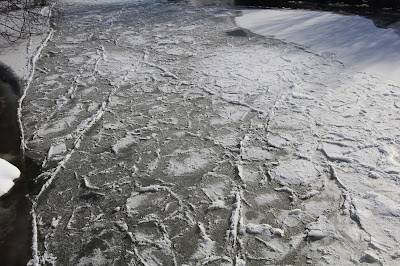 The surface of the river was beginning to freeze from the edges in toward the middle - this known as border ice.  Meanwhile the current continuously pushed blocks of ice and slush downstream.  The slush is technically known as frazil - it forms as semisolid ice in areas of the river where the current is too strong for the river to freeze solid. These blocks of frazil are usually referred to as pans. Some of the pans collided with and held fast to the border ice (and to each other) until the entire surface of the river was covered by ice.


One of the coolest features that I saw in the river was a rope of ice that formed along the edge of the accumulated ice pans.  This feature formed as new pans collided with the edge and pushed part of the frazil atop the solid ice.  Standing alongside the river, I could here the grating as these pans slid along the edge.

Parts of the river were completely frozen across from edge to edge.  Pans of ice continuously flowed against the edge of this solid surface.  Most of the pans stuck tight to the upstream edge, but others were pushed beneath the surface.  If these pans flowing under the surface freeze tight to the bottom of the surface ice they may form what is known as a hanging dam.  The formation of a hanging dam would potentially cause the current to back up and overflow the banks of the river.

With temperatures for Mt. Pleasant forecast to remain below freezing for at least the next week, the river surface is likely to completely freeze over in all but areas with the fastest current.  The semi-solid pans of frazil that have accumulated on the surface will freeze solid and more ice will accumulate on their undersides.  If temperatures remain cold enough, anchor ice may form on the riverbed in the fasted flowing areas.  Areas with a slow current may even freeze completely solid.


Next time you stop to look at a frozen river, examine it closely and you too might notice all of the unique features that went into crating that icy surface.
Posted by Mike.LeValley at 7:00 AM