Most of Michigan was unsettled until the mid-Nineteenth Century.  The majority of towns that did exist were either in the southeastern part of the state or were located along the shores of the Great Lakes and Michigan's many rivers.  Large portions of the state looked like this: 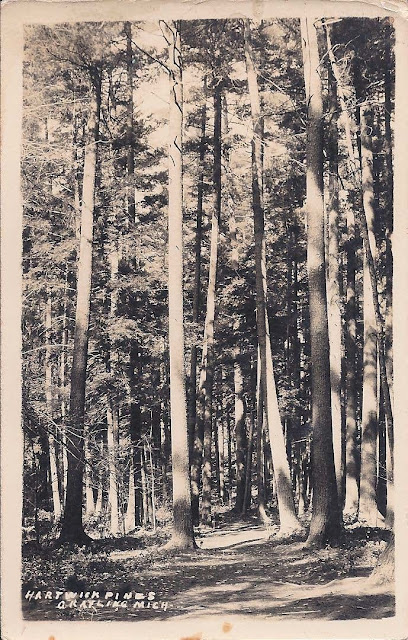 Many of the river valleys were full of mature forests of Eastern White Pine (Pinus strobus).  Where the pines grew in dense stands there was often very little underbrush.  The densely packed pines shaded everything below and prevented growth of a shrub layer or an understory.  Forests like this were common in the Saginaw, Muskegon, and Au Sable River watersheds.  With most of the construction in the United States being built of lumber, the forests of Michigan were recognized as a phenomenal resource (and potential source of wealth).

The completion of the Erie Canal in 1825 made it possible to ship timber products from the Great Lakes to cities on the East Coast.  However, at the time, sources of lumber in the East (primarily in Maine and New York) were sufficient to meet demands.  As stores of standing timber in those states were depleted and as the nation expanded rapidly, Michigan became the next obvious source of timber.  Between 1840 and 1860, the number of sawmills in Michigan doubled and the value of timber products harvested increased from $1 million to $6 million (from $27 million to $167 million in today's dollars).  The amount and value of timber harvested increased rapidly during the 1860s and by 1869 the Saginaw Valley alone was producing $7 million ($120 million in today's dollars) worth of lumber products annually.  Michigan would continue to lead the nation in timber harvests for the next thirty years.  Most of this value was from the harvest of White Pine.

So how did they get all the lumber out of the woods?

First they had to get the trees on the ground and cut into manageable lengths.  For that job they had two tools - the axe and the saw.


The Axe.  One of mankind's oldest tools.  It consist of a chopping edge on the end of a handle.  Today they are made of steel and forged in a factory.  At one time, every axe was hand-made by a blacksmith and designs varied by their country origin and the species of trees for which they were designed.  The first axes that were used by European settlers in North America were based on European designs and were quickly found to be insufficient for the trees found in North America.  Over time, the axe evolved to have this basic anatomy.

The metal part of an axe is called the head.  The head is traditionally mounted on a wooden handle- many new axes come with a fiberglass handle.  Depending on the type of axe, this handle may be either curved or straight. 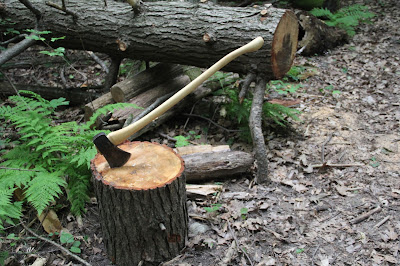 Axe heads that developed in different parts of North America will look different because they were designed for different purposes, but they all share the same basic anatomy.  Each pattern of axe has its own name.  There have been dozens of patterns developed over the past two and a half centuries.

Let's take a look at Michigan Pattern Axe to learn about axe anatomy.  This style of axe was designed for logging the large White Pines found in Michigan in the 19th Century.  The bit is shaped for chopping into large, possibly frozen, trees.  It is a good general purpose axe that works well on both soft and hard woods.  The Michigan Pattern is one of the few styles of American felling axes that is commonly made today. 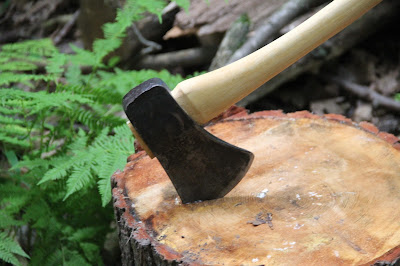 The cutting part of the axe is referred to as the bit.  This axe is a "single-bit" axe.  This means it has only one cutting edge. (I will look at a double-bit axe later.)  The bit is tempered to take and hold an edge.  This Michigan Pattern axe has a curved bit - many earlier styles had a straighter bit.  This curved bit would bite deeper into large trees than a similarly sized straight bit. 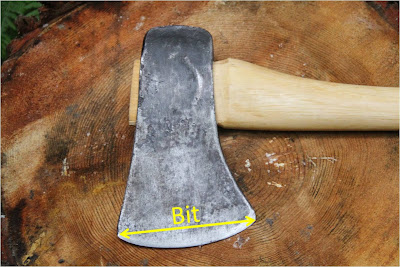 The corners of the bit also have names.  The corner of the bit farthest from the user is called the toe, the closer corner is known as the heel.  On a Michigan Pattern axe the toe and heel are slightly rounded.  This would prevent them from chipping when the axe was swung into knots or frozen wood. 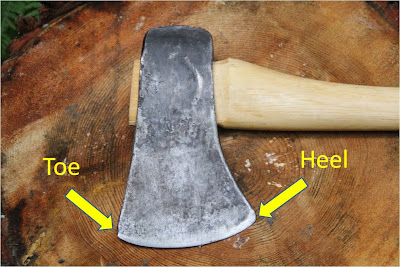 Opposite the bit (on a single-bit axe) is the poll.  The poll is NOT hardened.  It is not meant to be used as a hammer.  Its purpose is to add weight to the head.  This added weight allowed the axe to develop momentum as it was swung and bite deeper into the wood.  Early American axes had very minimal polls and were less suited for cutting large trees.  The poll on this Michigan Pattern axe is slightly rounded. 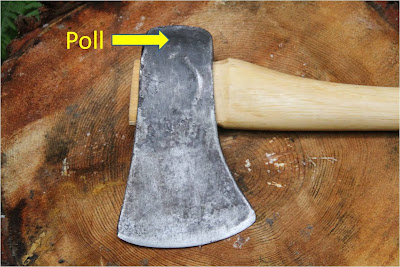 The sides of the axe are referred to as the cheeks.  The cheeks may be flat or have a convex surface. Sometimes bevels were cast or ground into the cheeks to help the axe from sticking in wood if the bit dug deeply. 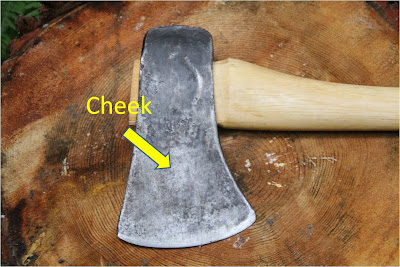 Up until about 1870 the axe was the only tool used to fell trees in Michigan.  First, a notch would be cut in one side of the tree with the axe and then the opposite side of the trunk would be cut.  If everything went right the tree would fall in the direction of the notch.  Fellers (the "lumberjacks" who cut down the trees) would use an axe depending on their personal preferences.  The axe may have weighed anywhere from 3 to 7 pounds.  The size of axe used would depend on what each individual was capable of swinging all day.  Some fellers preferred single-bit axes, other preferred a double-bit.  The double-bit had the advantage in that it did not need to be sharpened as often and the two bits could be sharpened at different angles - one side filed to a really sharp angle, the other kept a little wider for chopping into knots, stumps, or other wood that might chip the edge.


Once a tree was on the ground, a different crew of men called "swampers" would remove limbs from the tree so it could be cut into lengths.  The swampers were also responsible for clearing underbrush before a tree was felled and also constructed logging roads in the pineries.  (Because, swamping required less skill than felling, swampers were paid less than fellers.)  A Swamping Pattern axe was different than that used by fellers.  The bit on a "swamping" axe had a different profile than a felling axe.  Designed for limbing, the bit was usually wider and more rounded than a felling axe of similar size and weight.

Once the log has been limbed it is ready to be "bucked" or cut into lengths.  Logs were commonly bucked into lengths of 12, 14, 16, 18, or 20 foot.  The tool used for this was the two-man crosscut saw.  I mentioned earlier that until about 1870, all trees in Michigan were felled with axes.  After this time specialized saws were developed to do this job.  Unfortunately, I do not currently have a "felling" saw in my collection, but I can discuss the difference between a felling saw and a "bucking" saw.  Both the felling and bucking saws used in the lumber industry were designed to be used by two men - but could be used by one man.  Each end of the saw was fitted with a removable handle.  Because the handle was removable, the saw could be pulled through the cut if the saw started to bind.  On this style of handle (Eastern-style), the grip was twisted to loosen tension and the u-shaped loops could be removed from the notch on the end of the saw.

The cutting edge of both felling and bucking saws are lined with teeth, which cut into the wood and (possibly) rakers which remove the cuttings from the saw kerf (the path of the cut).  The valley between the teeth and/or rakers is known as the gullet.  This type of saw, with a repeating pattern of paired teeth followed by a raker is referred to as "Champion-tooth" saw.  Other common saw tooth patterns include Plain-tooth, M-tooth, and Great American-tooth (all of which lack rakers); and Lance- and Perforated Lance-tooth saws (which have rakers). 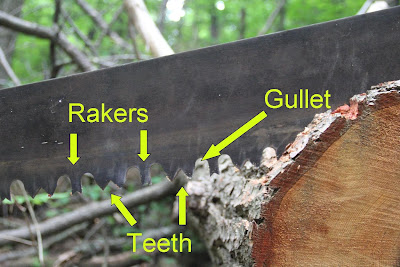 
Both the felling and bucking saws are designed to cut in both directions, but the work was done by each "sawyer" on the pull stroke.  As one sawyer pulled on the handle, the man on the other end of the saw would hold without "riding the saw" (resisting the pull).  Nor could the second man push the saw through the cut.  This would cause the saw to bow and bind in the cut.  If a cut started to close the sawyers would drive wooden or metal wedges into the cut to keep it open.  Wedges were also driven into the cut of a tree that was being felled by a saw to help the tree fall in the desired direction. 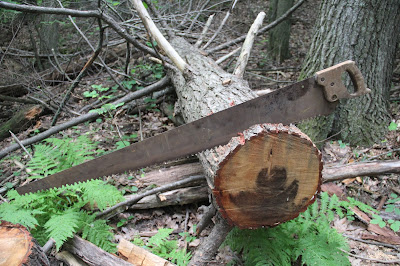 Another difference between the one-man and two-man saws is length.  The one man saws are meant to be used for bucking smaller logs into firewood.  My one-man saw is approximately 4 foot long.  The two-man saws are meant for bucking larger logs - mine is about 5 1/2 foot long.  Crosscut saws used in the Great Lakes were commonly made in lengths from 4 to 8 foot.  A 6 foot saw can comfortably used to cut a log with a diameter approaching 3 foot.

﻿﻿﻿
Look for more posts on logging tools in the upcoming weeks.  Up next: Cant Hook, Pike, and Peavey

Note: All of the axes in this post (with the exception of the double-bit Michigan Pattern) are vintage axes that have been restored back to working condition by my brother Jon LeValley.  If you are interested in more of his work, please visit his website LeValley Outdoors for information on purchasing or restoring your own axes and other edged tools.
Posted by Mike.LeValley at 11:55 AM