The Days of Summer - Day Thirty-eight through Day Forty-four

This is part six of my current photography project - The Days of Summer.

In the past, I have had times where I have gone days or even weeks without taking photographs.  This summer I set out to change that tendency.  I gave myself the task of recording images every single day between the Summer Solstice and the Fall Equinox.  Not only do I need to photograph something every day, but I am also sharing a single photo from each day on this blog.

To see the previous installment (part four) check out this link. 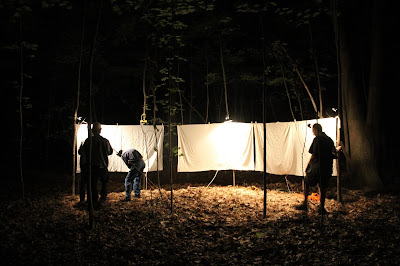 The week of 21 - 29 July was National Moth Week.  In celebration, I hosted two mothing events on the nights of 27 July (for the Chippewa Watershed Conservancy) and 28 July (for the Chippewa Valley Audubon Club).  This image is from the latter event at Mission Creek Woodland Park in Mt. Pleasant.  This image was taken shortly after the sun went down as the moths had barely started to come in.  Lots of moths were drawn to the lights, but this image was my favorite of the night. 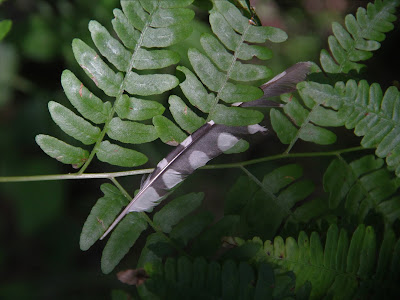 This picture of a woodpecker flight feather was taken during a hike to the top of Bundy Hill.  This feather belongs to either a Downy Woodpecker or a Hairy Woodpecker.  Although these two species look very much alike, they are not closely related.  The current theory is that the Downy evolved to look more like the Hairy so it wouldn't be harassed by the larger bird.

My general philosophy in regards to photo editing is that "Less is More."  This picture is probably the most heavily edited image I have ever posted on this blog.  It has been rotated 180 degrees from the original - I liked the quill better in the lower left of the image than in the upper right.  The image has also been cropped to better focus on the feather.  Even though I prefer to "crop with my feet" (move closer to the subject), I am usually okay with cropping an image down to better focus on the main subject.   I have also adjusted the brightness of this image.  The picture was taken in direct sunlight and the colors were rather washed out in the original. 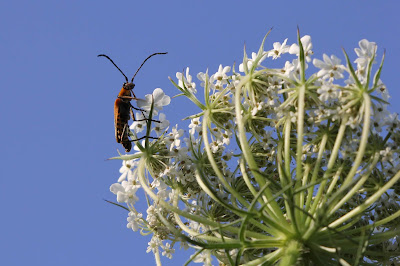 This picture of a Goldenrod Soldier Beetle (Chauliognathus pensylvanicus) on a Queen Anne's Lace (Daucus carota) was photographed at Forest Hill Nature Area.  The beetle was feeding on pollen and nectar on the small individual flowers.  To highlight the beetle against the sky, I lay on my back in the middle of a trail, leaned against my camera bag for support and, and aimed the camera upward.  I probably shot two dozen images of this beetle as it crawled around the flower, but the pose in this picture made it my favorite.  This image has been cropped slightly to reduce the amount of open space at the top and left of the picture. 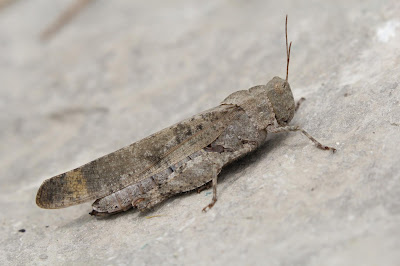 Unlike the previous two pictures.  This image has not been edited at all.  I photographed this Carolina Locust (Dissosteira carolina) at Chipp-A-Waters Park in Mt. Pleasant.  To get this picture I lay on a slab of limestone along the edge of the Chippewa River and focused tightly on the grasshopper.  I was at the minimum focus distance for the lens on my camera.  By working so close, I lost a little bit of detail on the legs, but check out the veining on the wings and the pattern on the head, thorax, and abdomen! 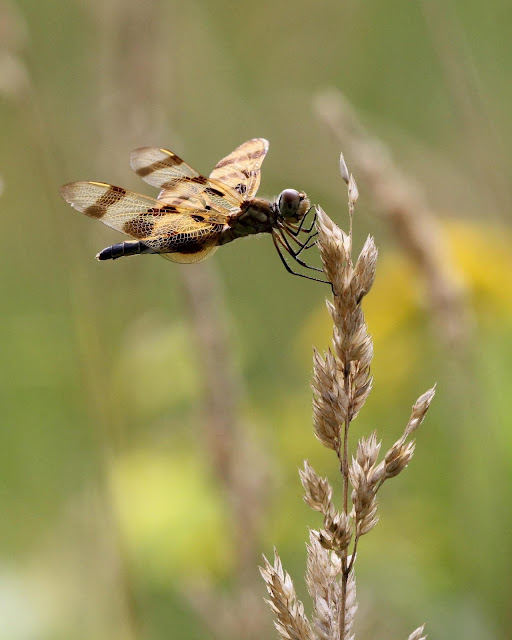 This image was also photographed at Chipp-A-Waters Park.  After photographing the Carolina Locust on the 31st, I noticed a Halloween Pennant (Celithemis eponina) hunting in a grassy area along the riverbank.  Despite repeated attempts, I was never able to get a picture that I made me happy.  I went back the next morning to try again.  I actually arrived too early and had to wait for insects to begin flying.  Eventually this Pennant showed up and I was able to get several photos.  I cropped this from a horizontal to a vertical image.  I liked the original, but I liked the vertical crop just a little bit more. 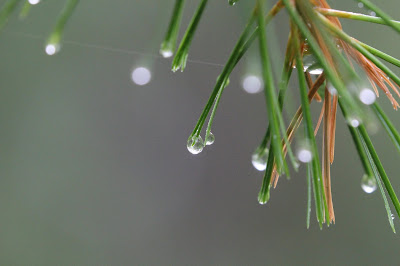 This picture was taken at North Higgins Lake State Park.  I spent the day doing a pair of activities for a summer camp being held by the Saginaw Chippewa Indian Tribe.  Due to stormy weather, we adjusted the schedule a little bit.  This left me with some time before my morning activity.  Although this is not the greatest image, I like the repetition of the spherical water droplets throughout the picture. 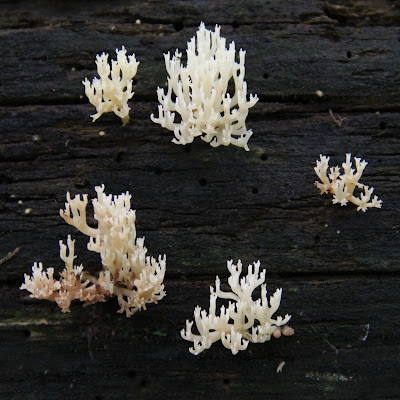 My final photo for the week was taken at Mission Creek Woodland Park.  Although sometimes I have a plan I go out to take photos (like with the Halloween Pennant pictured above), at other times it pays to just wander and see what happens.  I found these Crown Coral (Clavicorona pyxidata or Artomyces pyxidatus) growing on a rotten log in the middle of the woods.  If I hadn't wandered away from the trail I never would have discovered them.  Coral fungi are some of the coolest looking fungi that grow in Mid-Michigan, but I sometimes find them a challenge to photograph because they are such a start contrast to the dark wood.  I decided to crop this picture as a square eliminating another clump of fungus to the left of the picture.
Posted by Mike.LeValley at 4:24 PM